What would you (as SNB) do if you knew that the euro is doomed?

January 12, 2015: “We took stock of the situation less than a month ago, we looked again at all the parameters and we are convinced that the minimum exchange rate must remain the cornerstone of our monetary policy,” SNB’s Jean-Pierre Danthine.

January 15, 2015: “Recently, divergences between the monetary policies of the major currency areas have increased significantly – a trend that is likely to become even more pronounced. The euro has depreciated considerably against the US dollar and this, in turn, has caused the Swiss franc to weaken against the US dollar. In these circumstances, the SNB concluded that enforcing and maintaining the minimum exchange rate for the Swiss franc against the euro is no longer justified.” 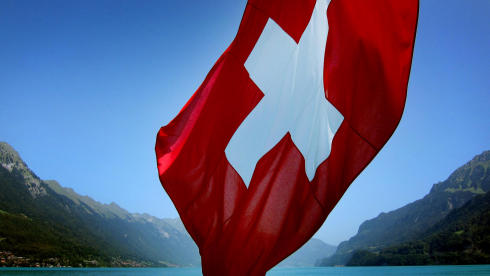 Over two decades ago, George Soros took on the Bank of England, and won. Just before lunch local time, the Swiss National Bank took on virtually every single macro hedge fund, the vast majority of which were short the Swiss Franc and crushed them, when it announced, first, that it would go further into NIRP, pushing its interest rate on deposit balances even more negative from -0.25% to -0.75%, a move which in itself would have been unprecedented and, second, announcing that the 1.20 EURCHF floor it had instituted in September 2011, the day gold hit its all time nominal high, was no more.

What happened next was truly shock and awe as algo after algo saw their EURCHF 1.1999 stops hit, and moments thereafter the EURCHF pair crashed to less then 0.75, margining out virtually every single long EURCHF position, before finally rebounding to a level just above 1.00, which is where it was trading just before the SNB instituted the currency floor over three years ago. 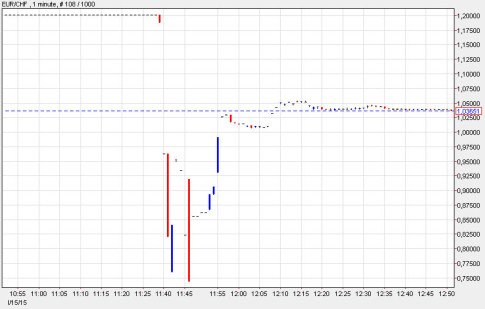 The Swiss National Bank (SNB) is discontinuing the minimum exchange rate of CHF 1.20 per euro. At the same time, it is lowering the interest rate on sight deposit account balances that exceed a given exemption threshold by 0.5 percentage points, to ?0.75%. It is moving the target range for the three-month Libor further into negative territory, to between –1.25% and -0.25%, from the current range of between -0.75% and 0.25%.

The minimum exchange rate was introduced during a period of exceptional overvaluation of the Swiss franc and an extremely high level of uncertainty on the financial markets. This exceptional and temporary measure protected the Swiss economy from serious harm. While the Swiss franc is still high, the overvaluation has decreased as a whole since the introduction of the minimum exchange rate. The economy was able to take advantage of this phase to adjust to the new situation.

Recently, divergences between the monetary policies of the major currency areas have increased significantly – a trend that is likely to become even more pronounced. The euro has depreciated considerably against the US dollar and this, in turn, has caused the Swiss franc to weaken against the US dollar. In these circumstances, the SNB concluded that enforcing and maintaining the minimum exchange rate for the Swiss franc against the euro is no longer justified.

The SNB is lowering interest rates significantly to ensure that the discontinuation of the minimum exchange rate does not lead to an inappropriate tightening of monetary conditions. The SNB will continue to take account of the exchange rate situation in formulating its monetary policy in future. If necessary, it will therefore remain active in the foreign exchange market to influence monetary conditions.

The resultant move across all currency pairs has seen the EUR and USD sliding, the USDJPY crashing, and US futures tumbling even as European stocks plunged only to kneejerk higher as markets are in clear turmoil and nobody knows just what is going on right now.

In other asset classes, Treasury yields, understandably plunged across the entire world, and the entire Swiss bond curve lest of the 10 Year is now negative, with the On The Run itself threatening to go negative soon as can be seen on the table below:

All Swiss government bill and bond yields out to 7 years are negative: pic.twitter.com/b4YCVSDFu7

Crude and other commodities, except gold, are also tumbling, as are most risk assets over concerns what today’s epic margin call will mean when the closing bell arrives.

An immediate, and amusing, soundbite came from the CEO of Swatch Nick Hayek who said that “words fail me” at the SNB action: “Today’s SNB action is a tsunami for the export industry and for tourism, and finally for the entire country.” More from Reuters:

Swatch Group UHR.VX Chief Executive Nick Hayek called the Swiss National Bank’s decision to discontinue the minimum exchange rate on the Swiss franc a “tsunami” for the Alpine country and its economy.

“Words fail me! Jordan is not only the name of the SNB president, but also of a river… and today’s SNB action is a tsunami; for the export industry and for tourism, and finally for the entire country,” Hayek said in an emailed statement on Thursday.

Swiss watchmakers, which are also grappling with weak demand in Asia, are very exposed to moves in the Swiss franc exchange rate because their production costs are largely in Swiss francs, but most of their sales are done abroad.

Shares in Swatch Group fell 15 percent at 1056 GMT, while Richemont CFR.VX was down 14 percent, underperforming a 9 percent drop in the Swiss market index .SSMI following the SNB’s announcement.

“Absolutely shocking … For companies with international operations – translated earnings are going to be lower and if companies make products in Switzerland it is going to hurt margin. It is a terrible day for corporate Switzerland,” Kepler Cheuvreux analyst Jon Cox said

Indeed, in retrospect, it does seem foolhardy that the SNB, whose balance sheet ballooned to record proportions just to defends it currency for over three years would give up so easily. The one silver lining, so to say, is that gold prices in CHF just crashed by some 13%.

Some more soundbites from strategists, none of whom foresaw this stunning move:

“This is extremely violent and totally unexpected, the central bank didn’t prepare the market for it. It’s sparking panic across all asset classes. It suddenly revives the risk of central bank policy mistakes, right when central bank action is what’s keeping equity markets going.”

“Major losses in euro-franc trades are causing panic selling and deleveraging across the board.”

“My initial reaction was that it is a sign the ECB is about to do something, which makes it odd that the reaction has been so negative across European stocks. However, it’s not every day that a central bank pulls the rug out from underneath something in such a massive way, and clearly people are worried that there’s something bigger afoot. This kind of event is the kind of thing that will trigger volatility. This is not a one day thing now.”

“The decision of the SNB means it no longer needs to buy euro-denominated paper in order to defend the 1.20 position. This should normally weigh on European debt but the SNB also said they will continue to monitor in order to prevent the exchange rate from rising substantially.

“This means that at the end of the day even if they don’t defend the 1.20 level, if they want to prevent a collapse of the euro versus the Swiss franc they will probably have to keep on buying, maybe at a lesser extent, euro denominated paper.”

“It has taken the market by complete surprise. The SNB probably expects the ECB to launch QE next week and along with the Greek elections coming up, it would make it pretty tough on the Swiss to keep bidding the euro.

So they have abandoned the cap and cut rates deeper into negative territory. We expect euro/Swiss to trade around 0.90-1.00 francs after all the stop loss orders have been cleared”

“They think too much money is going to come in, especially with QE coming, and so they think they need a ‘Plan B’.”

“Let it run, let it settle, and we’ll see what happens next.”

However, the best soundbites today will surely come from US hedge funds which are just waking up to the biggest FX shocked in years, and of course, any retail investors who may have been long the EURCHF, and who are not only facing epic margin calls, but are unable to cover their positions, and one after another retail FX brokerage has commenced “Rubling” the Swissy and as CHF pair as suddenly not available for trading.

To say that today will be interesting, is an understatement.