As the world’s number one energy consumer China is enjoying the low prices while they last. Never one to settle however, China is finding still more ways to take advantage of the dire straits gripping several oil producers.

China’s slowdown is real – preliminary data suggests 2014 will mark the weakest GDP growth in 24 years – but the country still has plenty of money to play with that is taking it places the World Bank and the International Monetary Fund (IMF) wouldn’t dare. Their reward? More oil of course. With tough conditions and greater access to raw commodities, China looks to turn the high risk into equal or greater returns.

In Russia, much has been made of the deepening energy ties with its neighbor to the south. With western financing no closer to a return and a hesitancy to dig deeper into its foreign exchange reserves, Russia turned to China for a bailout. China has obliged, agreeing to finance state-owned Rosneft’s debt in addition to opening a $24 billion currency swap program, which could expand further. For its part, China gains access to Russia’s tightly held upstream sector – in the form of the giant Vankor field – and fulfills its needs downstream with favorable long-term oil and gas deals. Further loans and infrastructure investments are likely moving forward – one of China’s biggest debt-rating agencies Dagong believes Russian debt is a safer investment than US government debt. 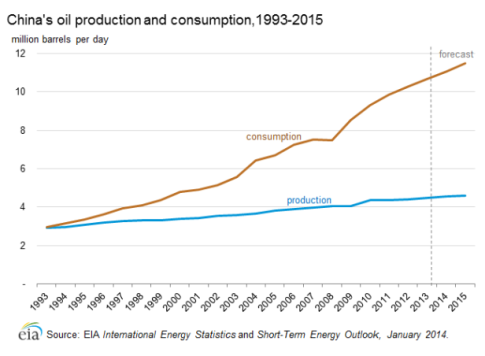 Russia’s economic situation is by no means rosy, but the state of affairs in Venezuela is downright awful. Oil and gas revenues account for one quarter of the country’s GDP and approximately 95 percent of its export revenues. Not surprisingly, low oil prices have the country teetering on the brink of default. Since 2007, Venezuela has borrowed more than $50 billion from China – loans that prevent Venezuela from otherwise marketing about half of its current exports to the Asian nation, which total approximately 500,000 barrels per day (bpd).

While perhaps more cautious, China is ready to keep giving. On Wednesday, Venezuela and President Nicolas Maduro landed more than $20 billion in investment for economic, social, and oil-related projects. This arrangement precedes what Maduro hopes to be a more liquid $16 billion loan that could be more freely applied to its other debt obligations. Still, China sets the terms and it wants more oil in return – more than 100,000 bpd greater than current levels.

Elsewhere in South America, Ecuador has pinned its development hopes to the Chinese for better or worse. Since 2008, Ecuador has borrowed in excess of $11 billion – 2013 saw 61 percent of government spending needs met by Chinese money. President Rafael Correa just secured a further $7.5 billion in loans and credit lines, but he has little more oil to give – the country already sells about 90 percent of its crude oil to China. Once offshore, China remarkets two-thirds of this supply, much of which reaches the United States. It’s a familiar picture across Latin America.

In Argentina, Brazil, Peru, and the aforementioned countries, China is fronting the bill and staking claim to the raw goods. The country’s high-interest, inflexible lending draws parallels to the multibillion-dollar payday loan industry in the US. In this scenario, the lender is caught in a circle of debt with no real impetus for change. That circle may continue for some as China is pledging $250 billion in investment in the region over the next decade. The country’s oil-based financing is still an unproven gamble – and lower prices increase the default risk – but it’s shrewd move for what will soon be the world’s largest consumer of oil.

And it’s not just LatAm, China’s imports of oil from Russia are up over 60% YoY – by a record 1.3 million metric tonnes… 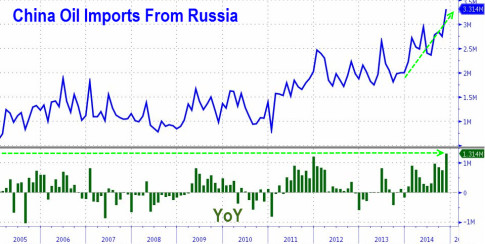