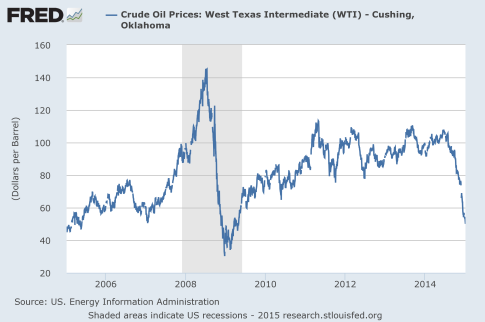 – Boom Goes The Dynamite: The Crashing Price Of Oil Is Going To Rip The Global Economy To Shreds (Economic Collapse, Jan 12, 2015):

f you were waiting for a “black swan event” to come along and devastate the global economy, you don’t have to wait any longer.  As I write this, the price of U.S. oil is sitting at $45.76 a barrel.  It has fallen by more than 60 dollars a barrel since June.  There is only one other time in history when we have seen anything like this happen before.  That was in 2008, just prior to the worst financial crisis since the Great Depression.  But following the financial crisis of 2008, the price of oil rebounded fairly rapidly.  As you will see below, there are very strong reasons to believe that it will not happen this time.  And the longer the price of oil stays this low, the worse our problems are going to get.  At a price of less than $50 a barrel, it is just a matter of time before we see a huge wave of energy company bankruptcies, massive job losses, a junk bond crash followed by a stock market crash, and a crisis in commodity derivatives unlike anything that we have ever seen before.  So let’s hope that a very unlikely miracle happens and the price of oil rebounds substantially in the months ahead.  Because if not, the price of oil is going to absolutely rip the global economy to shreds.

What amazes me is that there are still many economic “experts” in the mainstream media that are proclaiming that the collapse in the price of oil is going to be a good thing for the U.S. economy.

The only precedent that we can compare the current crash to is the oil price collapse of 2008.  You can see both crashes on the chart below…

If rapidly falling oil prices are good economic news, that collapse should have pushed the U.S. economy into overdrive.

But that didn’t happen, did it?  Instead, we plunged into the deepest recession that we have seen since the Great Depression.

And unless there is a miracle rebound in the price of oil now, we are going to experience something similar this time.

Already, we are seeing oil rigs shut down at a staggering pace.  The following is from Bloomberg…

U.S. oil drillers laid down the most rigs in the fourth quarter since 2009. And things are about to get much worse.

The rig count fell by 93 in the three months through Dec. 26, and lost another 17 last week, Baker Hughes Inc. data show. About 200 more will be idled over the next quarter as U.S. oil explorers make good on their promises to curb spending, according to Moody’s Corp.

But that was just the beginning of the carnage.  61 more oil rigs shut down last week alone, and hundreds more are being projected to shut down in the months ahead.

For those that cannot connect the dots, that is going to translate into the loss of large numbers of good paying jobs.  Just check out what is happening in Texas…

A few days ago, Helmerich & Payne, announced that it would idle 50 more drilling rigs in February, after having already idled 11 rigs. Each rig accounts for about 100 jobs. This will cut its shale drilling activities by 20%. The other two large drillers, Nabors Industries and Patterson-UTI Energy are on a similar program. All three combined are “likely to cut approximately 15,000 jobs out of the 50,000 people they currently employ,” said Oilpro Managing Director Joseph Triepke.

Unfortunately, this crisis will not just be localized to states such as Texas.  There are tens of thousands of small and mid-size firms that will be affected.  The following is from a recent CNBC report…

More than 20,000 small and midsize firms drive the “hydrocarbon revolution” in the U.S. that has helped the oil and gas industry thrive in recent years, and they produce more than 75 percent of the nation’s oil and gas output, according to the Manhattan Institute for Policy Research’s February 2014 Power & Growth Initiative Report. The Manhattan Institute is a conservative think tank in New York City.

A sustained decline in prices could lead to layoffs at these firms, say experts. “The energy industry has been one of the job-growth areas leading us out of the recession,” said Chad Mabry, a Houston-based analyst in the energy and natural resources research department of boutique investment bank MLV & Co. in New York City. “In 2015, that changes in this price environment,” he said. “We’re probably going to see some job losses on a fairy significant scale if this keeps up.”

If the price of oil makes a major comeback, the carnage will ultimately not be that bad.

But if it stays at this level or keeps going down for an extended period of time, it is inevitable that a whole bunch of those firms will go bankrupt and their debt will go bad.

That would mean a junk bond crash unlike anything that Wall Street has ever experienced.

And as I have written about previously, a stock market crash almost always follows a junk bond crash.

These are things that happened during the last financial crisis and that are repeating again right in front of our eyes.

Another thing that happened in 2008 that is happening again is a crash in industrial commodity prices.

At this point, industrial commodity prices have hit a 12 year low.  I am talking about industrial commodities such as copper, iron ore, steel and aluminum.  This is a huge sign that global economic activity is slowing down and that big trouble is on the way.

So what is driving this?  The following excerpt from a recent Zero Hedge article gives us a clue…

Globally there are over $9 trillion worth of borrowed US Dollars in the financial system. When you borrow in US Dollars, you are effectively SHORTING the US Dollar.

Which means that when the US Dollar rallies, your returns implode regardless of where you invested the borrowed money (another currency, stocks, oil, infrastructure projects, derivatives).

Take a look at commodities. Globally, there are over $22 TRILLION worth of derivatives trades involving commodities. ALL of these were at risk of blowing up if the US Dollar rallied.

Unfortunately, starting in mid-2014, it did in a big way.

This move in the US Dollar imploded those derivatives trades. If you want an explanation for why commodities are crashing (aside from the fact the global economy is slowing) this is it.

Once again, much of this could be avoided if the price of oil starts going back up substantially.

Unfortunately, that does not appear likely.  In fact, many of the big banks are projecting that it could go even lower…

Goldman Sachs, CitiGroup, Societe General and Commerzbank are among the latest investment banks to reduce crude oil price estimates, and without production cuts, there appears to be more room for lower prices.

OPEC could stabilize global oil prices with a single announcement, but so far OPEC has refused to do this.  Many believe that the OPEC countries actually want the price of oil to fall for competitive reasons…

Representatives of Saudi Arabia, the United Arab Emirates and Kuwait stressed a dozen times in the past six weeks that the group won’t curb output to halt the biggest drop in crude since 2008. Qatar’s estimate for the global oversupply is among the biggest of any producing country. These countries actually want — and are achieving — further price declines as part of an attempt to hasten cutbacks by U.S. shale drillers, according to Barclays Plc and Commerzbank AG.

The oil producing countries in the Middle East seem to be settling in for the long haul.  In fact, one prominent Saudi prince made headlines all over the world this week when he said that “I’m sure we’re never going to see $100 anymore.”

Never is a very strong word.

Could there be such a massive worldwide oil glut going on right now that the price of oil will never get that high again?

Well, without a doubt there is a huge amount of unsold oil floating around out there at the moment.

Some of the world’s largest oil traders have this week hired supertankers to store crude at sea, marking a milestone in the build-up of the global glut.

They said the flurry of long-term bookings was unusual and suggested traders could use the vessels to store excess crude at sea until prices rebound, repeating a popular 2009 trading gambit when prices last crashed.

The fundamentals for the price of oil are so much worse than they were back in 2008.

We could potentially be looking at sub-$50 oil for an extended period of time.

So hold on to your hats, because it looks like we are going to be in for quite a bumpy ride in 2015.