Back in November, before most grasped just how serious the collapse in crude was (and would become, as well as its massive implications), we wrote “How The Petrodollar Quietly Died, And Nobody Noticed“, because for the first time in almost two decades, energy-exporting countries would pull their “petrodollars” out of world markets in 2015.

This empirical death of Petrodollar followed years of windfalls for oil exporters such as Russia, Angola, Saudi Arabia and Nigeria. Much of that money found its way into financial markets, helping to boost asset prices and keep the cost of borrowing down, through so-called petrodollar recycling.

We added that in 2014 “the oil producers will effectively import capital amounting to $7.6 billion. By comparison, they exported $60 billion in 2013 and $248 billion in 2012, according to the following graphic based on BNP Paribas calculations.” 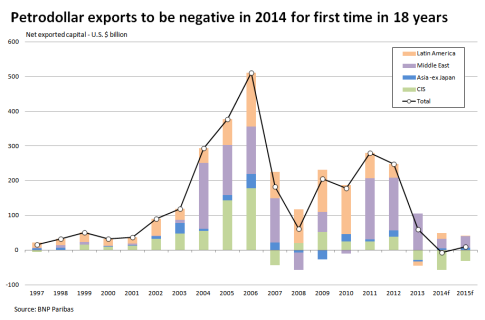 The problem was compounded by its own positive feedback loop: as the last few weeks vividly demonstrated, plunging oil would lead to a further liquidation in foreign  reserves for the oil exporters who rushed to preserve their currencies, leading to even greater drops in oil as the viable producers rushed to pump out as much crude out of the ground as possible in a scramble to put the weakest producers out of business, and to crush marginal production. Call it Game Theory gone mad and on steroids.

Ironically, when the price of crude started its self-reinforcing plunge, such a death would happen whether the petrodollar participants wanted it, or, as the case may be, were dragged into the abattoir kicking and screaming.

It is the latter that seems to have taken place with the one country that many though initially would do everything in its power to have an amicable departure from the Petrodollar and yet whose divorce from the USD has quickly become a very messy affair, with lots of screaming and the occasional artillery shell.

As Bloomberg reports Russia “may unseal its $88 billion Reserve Fund and convert some of its foreign-currency holdings into rubles, the latest government effort to prop up an economy veering into its worst slump since 2009.”

These are dollars which Russia would have otherwise recycled into US denominated assets. Instead, Russia will purchase even more Rubles and use the proceeds for FX and economic stabilization purposes.

“Together with the central bank, we are selling a part of our foreign-currency reserves,” Finance Minister Anton Siluanov said in Moscow today. “We’ll get rubles and place them in deposits for banks, giving liquidity to the economy.”

Call it less than amicable divorce, call it what you will: what it is, is Russia violently leaving the ranks of countries that exchange crude for US paper.

Russia may convert as much as 500 billion rubles from one of the government’s two sovereign wealth funds to support the national currency, Siluanov said, calling the ruble “undervalued.” The Finance Ministry last month started selling foreign currency remaining on the Treasury’s accounts.

The entire 500 billion rubles or part of the amount will be converted in January-February through the central bank, according to Deputy Finance Minister Alexey Moiseev. The Bank of Russia will determine the timing and method of the operation.

The ruble, the world’s second-worst performing currency last year, weakened for a fourth day, losing 1.3 percent to 66.0775 against the dollar by 3:21 p.m. in Moscow. It trimmed a drop of as much as 2 percent after Siluanov’s comments. The ruble’s continued slump this year underscores the fragility of coordinated measures by Russia’s government and central bank that steered the ruble’s rebound from a record-low intraday level of 80.10 on Dec. 16. OAO Gazprom and four other state-controlled exporters were ordered last month to cut foreign-currency holdings by March 1 to levels no higher than they were on Oct. 1. The central bank sought to make it easier for banks to access dollars and euros while raising its key rate to 17 percent, the emergency level it introduced last month to arrest the ruble collapse.

Today’s announcement “looks ruble-supportive, as together with state-driven selling from exporters it would support FX supply on the market,” Dmitry Polevoy, chief economist for Russia and the Commonwealth of Independent States at ING Groep NV in Moscow, said by e-mail. “Also, it will be helpful for banks, while there might be some negative effects related to extra money supply and risks of using some of the money on the FX market for short-term speculations.

Bloomberg’s dready summary of the US economy is generally spot on, and is to be expected when any nation finally leaves, voluntarily or otherwise, the stranglehold of a global reserve currency. What Bloomberg failed to account for is what happens to the remainder of the Petrodollar world. Here is what we said last time:

Outside from the domestic economic impact within EMs due to the downward oil price shock, we believe that the implications for financial market liquidity via the reduced recycling of petrodollars should not be underestimated. Because energy exporters do not fully invest their export receipts and effectively ‘save’ a considerable portion of their income, these surplus funds find their way back into bank deposits (fuelling the loan market) as well as into financial markets and other assets. This capital has helped fund debt among importers, helping to boost overall growth as well as other financial markets liquidity conditions.

[T]his year, we expect that incremental liquidity typically provided by such recycled flows will be markedly reduced, estimating that direct and other capital outflows from energy exporters will have declined by USD253bn YoY. Of course, these economies also receive inward capital, so on a net basis, the additional capital provided externally is much lower. This year, we expect that net capital flows will be negative for EM, representing the first net inflow of capital (USD8bn) for the first time in eighteen years. This compares with USD60bn last year, which itself was down from USD248bn in 2012. At its peak, recycled EM petro dollars amounted to USD511bn back in 2006. The declines seen since 2006 not only reflect the changed global environment, but also the propensity of underlying exporters to begin investing the money domestically rather than save. The implications for financial markets liquidity – not to mention related downward pressure on US Treasury yields – is negative.

Considering the wildly violent moves we have seen so far in the market confirming just how little liquidity is left in the market, and of course, the absolutely collapse in Treasury yields, with the 30 Year just hitting a record low, this prediction has been borne out precisely as expected.

And now, we await to see which other country will follow Russia out of the Petrodollar next, and what impact that will have not only on the world’s reserve currency, on US Treasury rates, and on the most financialized commodity as this chart demonstrates… 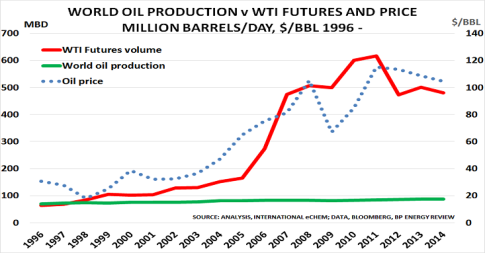 … but on what is most important to developed world central planners everywhere: asset prices levels, and specifically what happens when the sellers emerge into what is rapidly shaping up as the most illiquid market in history.

10 thoughts on “Russia Just Pulled Itself Out Of The Petrodollar”