“If he says it is Baloney, it must be true.”

Speaking to his favorite money-honey, billionaire Saudi Prince Alwaleed bin Talal told Maria Bartiromo that the negative impact of a 50% decline in oil has been wide and deep. As USA Today reports, the prince of the Saudi royal family said that while he disagrees with the government on most aspects, he agreed with their decision on keeping production where it is, adding that “if supply stays where it is, and demand remains weak, you better believe it is gonna go down more. I’m sure we’re never going to see $100 anymore… oil above $100 is artificial. It’s not correct.“ On the theory that the US and the Saudis have agreed to keep prices low to pressure Russia, the prince exclaimed, that is “baloney and rubbish,” adding that, “Saudi Arabia and Russia are in bed together here… both being hurt simultaneously.”

Q: Can you explain Saudi Arabia’s strategy in terms of not cutting oil production?

A: Saudi Arabia and all of the countries were caught off guard. No one anticipated it was going to happen. Anyone who says they anticipated this 50% drop (in price) is not saying the truth.

Because the minister of oil in Saudi Arabia just in July publicly said $100 is a good price for consumers and producers. And less than six months later, the price of oil collapses 50%.

Having said that, the decision to not reduce production was prudent, smart and shrewd. Because had Saudi Arabia cut its production by 1 or 2 million barrels, that 1 or 2 million would have been produced by others. Which means Saudi Arabia would have had two negatives, less oil produced, and lower prices. So, at least you got slammed and slapped on the face from one angle, which is the reduction of the price of oil, but not the reduction of production.

Q: So this is about not losing market share?

Q: What is moving prices? Is this a supply or a demand story? Some say there’s too much oil in the world, and that is pressuring prices. But others say the global economy is slow, so it’s weak demand.

A: It is both. We have an oversupply. Iraq right now is producing very much. Even in Libya, where they have civil war, they are still producing. The U.S. is now producing shale oil and gas. So, there’s oversupply in the market. But also demand is weak. We all know Japan is hovering around 0% growth. China said that they’ll grow 6% or 7%. India’s growth has been cut in half. Germany acknowledged just two months ago they will cut the growth potential from 2% to 1%. There’s less demand, and there’s oversupply. And both are recipes for a crash in oil. And that’s what happened. It’s a no-brainer.

Q: Will prices continue to fall?

A: If supply stays where it is, and demand remains weak, you better believe it is gonna go down more. But if some supply is taken off the market, and there’s some growth in demand, prices may go up. But I’m sure we’re never going to see $100 anymore. I said a year ago, the price of oil above $100 is artificial. It’s not correct.

Q: Wow. And you said you are in agreement with the Saudi government to not give up market share?

Q: Should the Saudis cut production if they get an agreement with other oil producing countries to take oil off the market?

A: Frankly speaking, to get all OPEC countries to approve and accept it, including Russia and Iran, and everybody else, is almost impossible You can never have an agreement whereby everybody cuts production. We can’t trust all OPEC countries. And can’t trust the non-OPEC countries. So it’s not on the table because the others will cheat. The past has proven that. When Saudi Arabia cut production in the ’80s and ’90s, everybody cheated and took market share from us. Plus, remember there is an agenda here also. Although Saudi Arabia and OPEC countries did not engineer the reduction in the price of oil, there’s a positive side effect, whereby at a certain price, we will see how many shale oil production companies run out of business. So although we are caught off guard by this, we are capitalizing on this matter whereby we’ll live with $50 temporarily, to see how much new supply there will be, because this will render many new projects economically unfeasible. 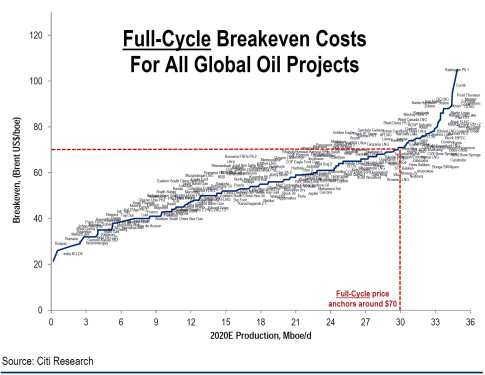 Q: What about the theory of the pressure on the Russians? There’s a theory that the U.S. and the Saudis have agreed to keep prices low to pressure Russia because of what Putin has done in Ukraine.

A: Two words: baloney and rubbish. I’m telling you, there’s no way Saudis will do this. Because Saudi Arabia is hurting as much as Russia, period. Now, we don’t show it because of our big reserves. But I’ll tell you Saudi Arabia and Russia are in bed together here. And both are being hurt simultaneously. And there’s no political conspiracy whatsoever against Russia. Because we are shooting ourselves in the foot if we do that.

Q: You said the price of oil will dampen the shale revolution in America. How?

A: Shale oil and shale gas, these are new products in the market. And we see big ranges. no one knows for sure what price is the breaking point for shale. Wells have a higher production cost. And very clearly these will run out of business, or at least not be economical. At $50, will it still be economically feasible? Unclear. This is a very much developing story.