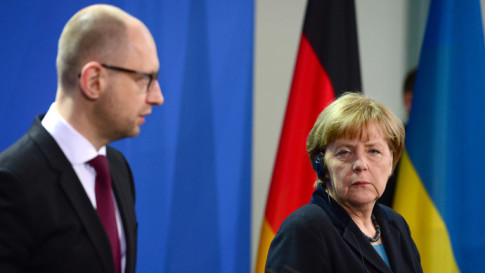 When I saw the comments on my Twitter timeline, I was initially convinced it was a joke. So much disinformation is circulated on the platform that I automatically dismissed it as a misquote. Surely a senior politician wouldn’t say something like that? Only 24 hours later, when I saw Yatsenyuk’s words still swooshing through the Twitter-sphere, did I realize that he actually did utter those words.

Arseniy Yatsenyuk, apparently handpicked for the PM post by US diplomat Victoria Nuland, believes the USSR invaded Germany in WW2. This runs contrary to the almost universally accepted narrative that Germany actually attacked the Soviets first in Operation Barbarossa. After repelling the attack, USSR forces eventually made it to Berlin where they met the other liberating powers, the USA and Britain.

Naturally, some are claiming that Yatsenyuk made a slip of the tongue. This is hogwash. The only thing that dropped was his mask. I’ve heard similar remarks before and the location was Western Ukraine, where the PM is from. Yatsenyuk hails from Chernivsti, widely regarded as the region’s second cultural capital, after Lvov, which is viewed by many as the nationalist stronghold.

Something interesting used to happen each May 9 in Ukraine (the anniversary of the German surrender in 1945). Kiev, Kharkov, Odessa, Donetsk, Dnipropetrovsk and all the other major cities, bar one, honored the defeat of the Nazis. Many in Lvov have never looked too happy with the day. In fact, in 2011, local ‘patriots’ went a step further by attacking a small gathering of veterans who were commemorating the occasion.

The reason for this feeling is simple. West Ukrainians believe that they lost the war. Their side was defeated. Put simply, Yatsenyuk is merely a product of his environment. However, this time he expressed publicly a view that was probably previously restricted to private discourse. It’s possible that he felt a German audience might have been sympathetic to his position. If so, that was a huge misread of the German people.

Standard North American and Western European history textbooks give students the impression that WW2 in Europe was a fight between Germany, the USSR, France and the UK, with the US getting involved later. The other countries where the war was fought are, largely, regarded as victims of Germany. This is simplistic. In reality, Germany wasn’t alone in its invasion of the USSR in 1941. Forces from Romania, Finland, Italy, Hungary and Slovakia also took part and West Ukrainian elements collaborated with Hitler’s war machine.

The difference between Ukraine and, for example, Slovakia is that Slovaks have come to understand that their wartime behavior was wrong. The pro-Nazi leader, Jozef Tiso, is rightly reviled among the vast majority in Kosice and Bratislava. However, in West Ukraine, their chief Hitler acolyte Stepan Bandera is accorded ‘hero’ status. Indeed, there’s a gigantic statue of him in front of the main railway station in Lvov.

Ukrainian reverence for relics of the Nazi past is both embarrassing and worrying for Germany. I’m sure Merkel often wishes that her NATO allies had found a more reasonable client state to antagonize Russia with. Ukraine’s refusal to deal with its past head-on is a festering boil for EU diplomats.

Just this week, the Czech President, Milos Zeman, was embroiled in an argument with Bandera fan boys in Ukrainian academia.

“You are aware of the Bandera statement: ‘You must kill every Polish person between 16 and 60 years of age?’ If you say you don’t know this – then what kind of scholars of Ukrainian studies are you?” he wrote.

Zeman continued: “I want to tell you that Bandera wished to make out of Ukraine a vassal state of Germany… I can’t congratulate a country that has such ‘national heroes.’”

This also explains the silence of German media on Yatsenyuk’s words. If the German public were made fully aware of what the visitor from Kiev had said, they would be outraged. So much so that Merkel could be forced to withdraw all support for Ukraine.

If Yatensyuk’s comments were widely circulated, they would embolden revisionists in Germany and beyond – something there is, sadly, no shortage of.

Just as it seemed the story would fade away, the Russian Foreign Ministry made a late intervention, asking Berlin to outline its official position on Yatsenyuk’s verbiage. The reply, assuming it ever arrives, will be telling.