The situation in France is going from bad to worse. First there is the two Paris terror-attack suspects hostage crisis in an industrial estate north of Paris. Secondly, an apparently linked (according to police) hostage crisis is also under way in an East Paris kosher grocery, where a suspect in the Thursday fatal shooting of a police officer in Paris’ Monrouge area, identified as Amedi Coulibaly, 32, has now issued a warning that he will kill hostages if police storm the terror-attack brothers. What is even more curious is that Coulibaly met with French President Sarkozy in 2009, hoping to find a job.

As ABC reports, a 2nd hostage-taking was reported in eastern Paris today involving a suspected gunman in the fatal shooting of a police officer in the city’s Monrouge area, authorities said.

Heavily armed SWAT teams moved into Porte de Vincennes after the hostage situation developed at a kosher grocery, involving a gunman and at least one hostage, police said.

The Paris Public Prosecutor’s office confirmed the standoff is connected to another hostage situation that was occurring at the same time outside Paris, where police were engaged with two gunmen suspected in Wednesday’s Charlie Hebdo massacre.

Police told ABC News that a suspect in the Thursday fatal shooting of a police officer in Paris’ Monrouge area, identified as Amedi Coulibaly, 32, is believed to be involved with the grocery standoff.

Police issued a wanted poster for both Coulibaly and another female suspect named Hayat Boumeddinene today in the killing of the policewoman. Police also gave more details about the attack, saying Coulibaly wore body armor when he allegedly killed the officer.

The other hostage situation is taking place in the town of Dammartin-en-goele outside of Paris. The two men, identified by police as Said Kouachi and Cherif Kouachi, were holed up in a printing company in a town northeast of Paris, taking one male employee hostage, said Audrey Taupenas, a spokeswoman for Dammartin-en-Goele City Hall.

As Le Parisien reports, the 2nd hostage-taker met with Sarkozy in 2009…

He spent all his life in the neighborhood of Great Borne in Grigny and will meet today Nicolas Sarkozy . Amedi Coulibaly, 27, works in professional contract with Coca-Cola plant in his hometown. 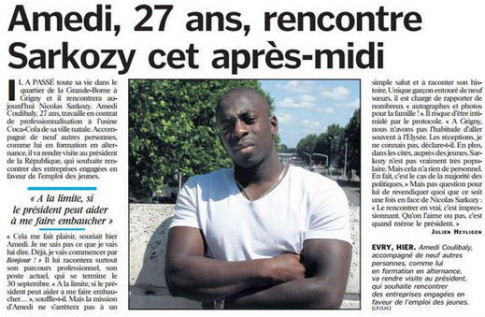 He and nine other people like him in alternating training, he will visit President of the Republic, who wants to meet companies engaged in favor of the employment of young people.“Ultimately, if the president can help me get hired “ “It’s good, smiled yesterday Amedi. I do not know what I’ll say. Already, I’ll start with Hello! “Above all, tell him his career, his current position, which ends on 30 September.

In addition, in the cities, with youth, Sarkozy is not really very popular. But it’s nothing personal. In fact, it is the case of most policies . “But the question for him to claim anything once in front of Nicolas Sarkozy:” The encounter in real life, it is impressive. Like it or not, it’s still the president.“