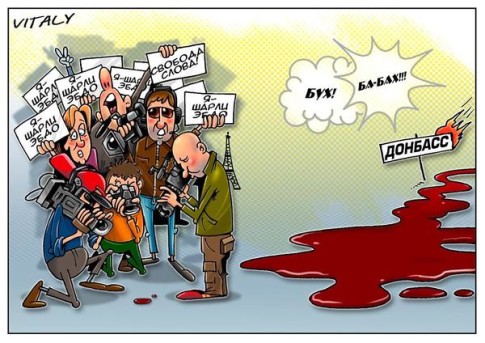 Apparently it’s all about who does the killing.

Charlie Hebdo terrorist attack once again showed the world that the Western mainstream media can be vigilant … when it is in the Western interests.

A rightful uproar over the deaths of journalists in Paris makes MSM’s silence, ignorance and quiet approval of Kiev’s atrocities in Donbass all the more apparent.

We learn once again that killings by radical Muslims are not OK, but killings by governments are just collateral damage, as long as that government is willing to open up its country to the plunder of Western banks and corporations.

Democracy is only about hearing pro-Western voices, other voices are not to be heard, and should be silenced by bombs.

Armed mobs of radical nationalists are only no good when they threaten a pro-Western government and raise the uncomfortable questions about its American supporters.

They are perfectly acceptable, as long as their anger, fury and vengeance is directed towards the citizens of Crimea and Eastern Ukraine for not wanting to cut ties with their historic motherland and abandon their culture.