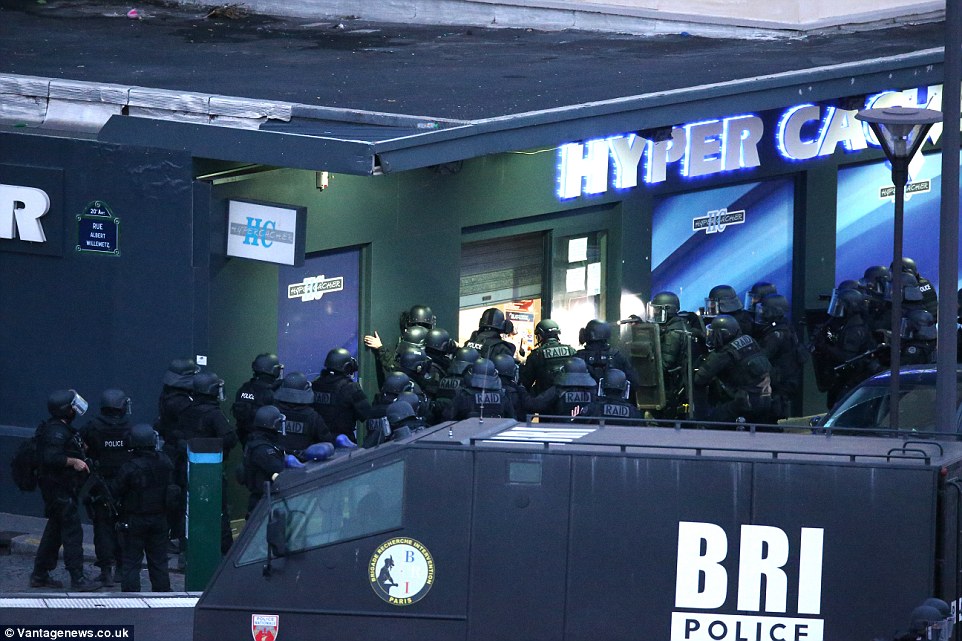 I never understood why these crack S.W.A.T special forces don’t strategically wait 24-48 hours so as to exhaust the terrorists and gas them out, or at the very least catch them off guard at night perhaps, instead of impetuously storming the building, which virtually assures that hostages are killed as well.

One would assume the pros know what they’re doing, but it sure as hell seems questionable. C’mon now, slowing and mechanically raising a security gate, are you kidding me???  You can’t be serious!  What ever happened to the element of surprise, isn’t that like terrorist manhunt school 101?

Don’t get me wrong, it’s just that I would much rather see these crazed craven characters professionally tortured, effectively interrogated and only then summarily executed, so that at least we stand a fighting chance to find out who and what was really behind them………and certainly the hostages spared at all costs.

I mean once they have these scumbags completely cornered with thousands of expert anti terrorist police securely surrounding the perimeter, what’s the big rush to go in there guns a blazing.

Seriously, these crazed undisciplined young terrorist couldn’t stay awake for days on end, yet the expert S.W.A.T teams can, as they would rotate shifts. Just seems so ill-considered and outright reckless when innocent hostages are involved.

The end result of the special forces’ rash actions:

A)  We don’t have the opportunity to effectively interrogate them to see who’s really behind this.

B)  We make them Martyrs and heroes for the Jihadist cause.

D)  Spared demeaning execution in the public square after an expeditious Int’l Tribunal.

All seems rather short sighted and patently barbarous to sacrifice the hostages so readily.

My best guess is that the order came from the top, as Hollande wanted to appear like a tough guy, since the public widely views him as an ineffective weak president, not to mention that his strongest political opponent, Le Pen, is surging in the polls.  In case you’re unaware, she’s a firece nationalist who’s anti immigration, and wants to dump the Euro.

Moreover, dead guys can’t tell you who really put them up to the job. Maybe, the CIA and Mossad like it that way? Seriously makes you wonder. These rabid half-grown rascals always end up dead on the spot, nearly every time, and we then we know nothing afterwards?

I suppose The Military Terror/Industrial Complex needs an excuse to keep the war machine in full force?  Is that it? Who really knows what’s behind all of this malignant mayhem, I certainly no longer trust our marionette leaders explanations, there are powerful forces at play behind them without a shred of doubt.

Maybe the civilized West carpet bombing nearly half a million of these desperate beings in undeveloped regions with needless wars is not too swift either, blowback’s an angry bitch…..

A very difficult nasty situation is at hand, which clearly requires a new approach.

Surely it would be smarter for the developed West to spend the nearly 3 trillion USD that was so readily wasted on senseless bloodshed and useless wars of massive death, destruction and mayhem towards more useful strategic capital initiatives, in order to promote and improve the economic conditions in these barren lands, so that the people might just uplift themselves and become more productive to human civilization.

Perhaps then they would be more inclined to stay home minding their own turf.  Instead, we seem hell-bent on further inciting and igniting the fierce flames of fanaticism, ensuring that their youth feel compelled and hell-bent to come terrorize us in our own cities, via zealous acts of horrific mindless youthful desperation.

Ask yourselves, who and what interests really benefit from promoting this abject carnage?

Sure makes one wonder sometimes…………………