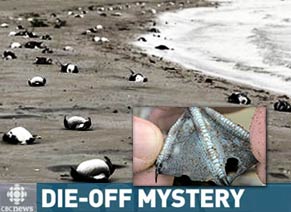 – Unprecedented: ‘Cataclysmic’ die-off of birds on entire West Coast — Beaches covered with dead bodies — Professor: It’s tragic… never seen anything like this… We ignore it at our peril… Canary in the coalmine for us… Scrambling to figure out what’s going on with ecosystem (VIDEOS) (ENENews, Jan 9, 2015):

Statesman Journal, Jan 2, 2015 (emphasis added): Why is the beach covered in dead birds?…  “I’ve never seen that many before”… a mass die-off [is] going on along the entire West Coast… “To be this lengthy and geographically widespread, I think is kind of unprecedented,” [said Phillip Johnson of the Oregon Shores Conservation Coalition].

Oregonian, Jan 6, 2015: Dave Nuzum, a wildlife biologist… said his office continues to field calls from concerned beach-goers who come across a grisly scene: Common murres and Cassin’s auklets dead on the beach in great numbers… Oregon is the cataclysm’s epicenter… He doesn’t expect the crush of deaths to let up any time soon… [It’s] up to 100 times greater than normal annual death rates.

Prof. Julia Parrish, Univ. of Washington School of Aquatic & Fishery Science, Jan 6, 2015: This is the worst wreck of cassins auklets that we’ve ever seen on the West Coast… Certainly we are concerned… Is it that there’s less of their food, or perhaps that food has changed its distribution?… How many cassins may actually be suffering in this particular mortality event? We’re working with oceanographers and atmospheric scientists to try and discover whether there’s something in the environment which is signaling a difference, signaling a change. >> Full broadcast

Prof. Parrish #2, Jan 6, 2015: We’re seeing some adults wash up… The bumper crop [born this year] can’t quite explain [this]… We’re easily seeing tens of thousands, if not actually more… Normally [they] can exist out in the N. Pacific [far] from the coastline over the winter. We think that the population for some reason has snugged up to the coast… Unfortunately the cassins are the canary in the coalmine for us, so they’re telling us something is going on. To put it mildly, we’re still scrambling to figure out what’s going on with the ecosystem… Of course, everybody always wants to point the finger at climate change. The thing about climate change is it’s a very slow, steady change. >> Full broadcast