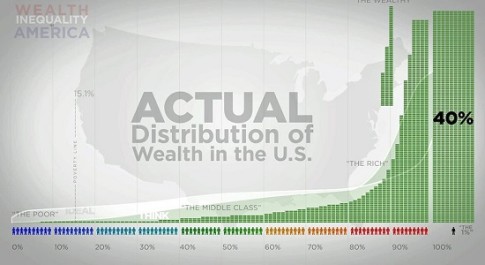 What will you accept as real–your intuition that something is deeply amiss in America, or the official propaganda that all is well?

In 1967, the rock group Buffalo Springfield recorded a song titled For What It’s Worth which speaks not just to the late 1960s but to the present.
Consider the opening lines:

The ambiguity is not coincidental. When the song was recorded in December 1966, America was in the beginning throes of a full-blown national nervous breakdown that would endure for 15 years until 1981.
The fundamental narratives that had sustained the previous 20 years of apparently limitless prosperity and moral certitude were breaking down.The primary narrative of American foreign policy–that the U.S. defended liberty and always won its foreign wars over evil totalitarianism/ fascism/ colonialism was being destroyed on a daily basis in Vietnam, an intrinsically political (and thus unwinnable by military means) war defending a hopelessly corrupt state created by quasi-colonial Great Powers fiat.
The primary political narrative–that democracy and the rule of law were sacrosanct–were undermined by the Watergate affair a few years later.
Millions of solid citizens with crewcuts and permed hairdo’s looked at long-haired musicians and hippies, student protests and the emergence of ethnic and women’s rights movements with dismayed disorientation–something’s happening here, but why it’s happening ain’t exactly clear.
Meanwhile, those being held in contempt by the status quo were wondering why the shackles of the supposed golden era were so invisible to everyone who was wondering why the 1960s had exploded out of the idyllically secure and prosperous 1950s.
Those doing well reckoned everything is great because I’m doing great.
This is the source of national nervous breakdowns: those benefiting from the current arrangement–the privileged few and the vested interests skimming personal wealth from the political machinery and the economy–see only rosy statistics that verify their own privileged perspective that everything’s going great.
Those whose experience is decidedly un-great see the problem differently: the problem is the political machinery and the corporate media are trying to manage perceptions rather than tackle the dysfunctional reality.
In effect, the Status Quo of happily vested interests is waging war on our intuition that there is something fundamentally amiss in America–something on the scale of the period 1966-1981 that saw the complete destruction of the official narratives.
Those outside the privileged few and the protected fiefdoms of vested interests–public unions, cartels, Wall Street, K Street, bankers, etc.–are constantly told their perception is the problem: the statistics and Wall Street prove everything’s going great, so get with the program and stop being negative.
This of course goes hand in hand with blaming the less privileged: if only you worked as hard as we do, you wouldn’t be experiencing anything but blue-sky prosperity.
This is of course the default perspective of privilege: overlook the unspoken advantages of privilege and lecture the less privileged on how they would be doing just fine if they were inside the gated fiefdoms instead of toiling in the wastelands beyond the walls of wealth and political power.
Here is A Simple but Powerful Lesson About Privilege.
That something’s happening here, but what it is ain’t exactly clear is not coincidence–the ambiguity is the direct result of the war on our intuition, which is signaling us that the propaganda-driven narratives are false, despite being backed by (heavily gamed) statistics and the ceaseless reassurances of officials and “trusted” media sources.
Subtextually, we are constantly told that not only is the current arrangement that rewards vested interests not only the best possible world— it is the only possible world: America cannot possibly operate in any other way than the current dysfunctional, predatory, parasitic, corrupt and venal arrangement that protects and enriches the few at the expense of the many.
Here is a chart of wealth inequality:

Those of us who have benefited from the vast expansion of asset bubbles (anyone who owns real estate, stocks or bonds that have appreciated greatly in the past six years–and I raise my hand to real estate) are supposed to remain silent, since we shared in the largesse. But complicity has a price, and I for one would be happy to see real estate fall in half (yes, half) so housing would again be affordable to the younger generations.
It’s said that everyone has a price (usually by those doing the buying), but this is not true. Being bought off is a transaction of two parties.
It boils down to this: are America’s problems real, or are they the result of perception? The Status Quo is expending staggering sums of time, money and energy to convince you that it’s perception: if only you believe the statistics and assurances, all the problems your intuition has red-flagged will vanish.
So what will you accept as real–your intuition that something is deeply amiss in America, or the official propaganda that all is well? The goal of this war is to persuade you to surrender your independence and intuition in favor of passive acceptance of the cleverly cloaked tyranny of the current arrangement.
If they cannot persuade you, then disorienting you will do. Misdirecting your intuition is victory enough.

1 thought on “2015: The War on Our Intuition That Something Is Fundamentally Amiss”