All is clearly not well below the surface. Europe’s largest bank (by market value) has admitted in a regulatory filing that it needs to raise capital. As WSJ reports,Banco Santander SA said it would raise up to €7.5 billion ($8.88 billion) in a capital hike, a bid to address long-running concerns among investors and analysts that its financial cushion was weaker than peers. European banking stocks are up over 2% today as Italian banks surge
limit up (BMPS +13%) on speculation that they will be purchased by Santander (who ‘pumpers’ believe are raising this capital to go on a spending spree) and ‘old’ Draghi headlines.

Santander, the largest bank in the eurozone by market value, said in a regulatory filing on Thursday that it would raise the capital through an accelerated book build.

The Spanish stock market regulator suspended trading in the bank’s shares ahead of the announcement.

Santander said in its most recent quarterly earnings presentation that its capital ratio under the latest regulatory requirements, known as “fully-loaded” Basel III criteria, would be around 8.5% to 8.6% of risk-weighted assets, below its European peers and a source of concern for some analysts and investors.

The move is the latest by Ana Botín, who took over as the bank’s executive chairman in September after the death of her father, longtime chairman Emilio Botín. 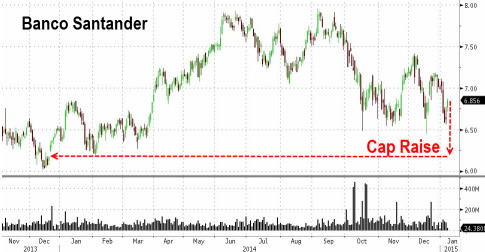 And that means speculation… and Italian banks take off… 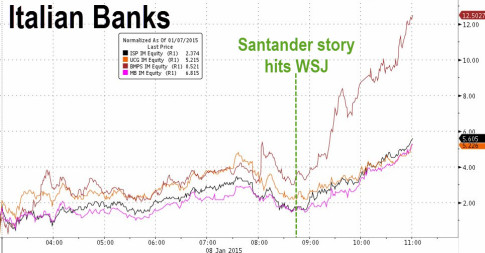 And the Santander crushed the specs dreams…