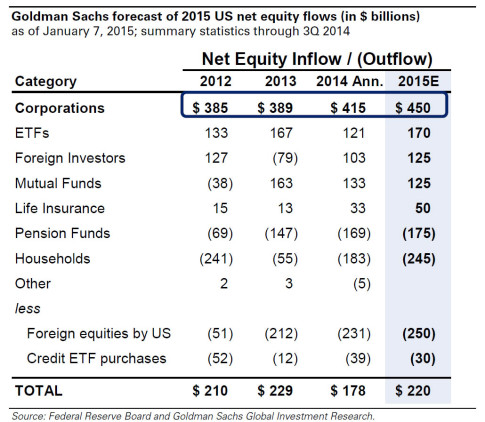 Back in May, when the world was still wondering who would step in and bid up US stocks now that the Fed has, if only for the time being, stepped away from indirectly monetizing $1 trillion in US risk every year courtesy of a POMO a day (keeping the short sellers away), we revealed that mysterious buyer’s identity: the stock-issuing companies themselvesby way of record amounts of stock buybacks, which – funded with new debt issuance – have resulted in net corporate debt levels rising to fresh all time highs. In fact, as Goldman clarified further in November “buybacks have been the largest source of overall US equity demand in recent years.”

So as we look at 2015, and with the Fed still on the sidelines and in fact many anticipating the Fed to begin hiking rates in the summary despite Charlie Evans’ warning last night that such an action would be “catastrophic”, the question once again emerges: who will be the biggest buyer of stocks in 2015?

The answer, courtesy of Goldman Sachs and largely predictable to anyone who realizes that in this macabre Chuck Princian game of musical debt chairs management must buy stock back to boost their compensation to record levels before everything crashes, is the same: corporations.

According to Goldman, the stealth LBO of the S&P 500 will not only continue in 2015 but accelerate, with another 2% of the entire market cap converted into debt, thanks to a whopping $450 billion in net corporate inflows, $35 billion more than the $415 billion in corporate inflows in 2014.

And while ETFs, foreign investors, mutual funds and life insurance companies will also be net buyers of stocks, who will, in addition to Pension Funds – expected to sell a record $175 billion in stock in 2015 – be, for the 10th year, the largest seller of US equities? Households.