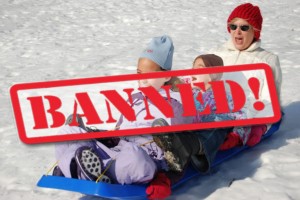 Shutting down sledding hills is inspired by the same sort of simpering caution that keeps Americans shoeless in airport security lines and, closer to home, keeps parents from letting their kids walk a few blocks to school alone, despite the fact that America today is as safe as the longed-for “Leave It to Beaver” golden age.

– From The Economist article: Home of the Unbrave

It’s winter in the northern hemisphere, which means that countless hordes of children and their parents are excited to engage in that timeless pursuit of youthful seasonal pleasure: sledding. Many of us who grew up in colder climates have gone sledding at least once or twice. Yes it can be dangerous at times, but so are many of the other activities young rambunctious kids partake in. That’s part of being a child. Indeed, it’s part of life in general unless you want to stay cooped up in your cubicle or home 24/7.

As crazy as it may sound, many cities across the U.S. are actually moving to ban sledding within their municipalities. The Associated Press reported the following earlier this week:

DES MOINES, Iowa (AP) — As anyone who has grown up around snow knows, part of the fun of sledding is the risk of soaring off a jump or careening around a tree.

But faced with the potential bill from sledding injuries, some cities have opted to close hills rather than risk large liability claims.

No one tracks how many cities have banned or limited sledding, but the list grows every year. One of the latest is in Dubuque, Iowa, where the City Council is moving ahead with a plan to ban sledding in all but two of its 50 parks.

“We have all kinds of parks that have hills on them,” said Marie Ware, Dubuque’s leisure services manager. “We can’t manage the risk at all of those places.”

In Omaha, the city banned sledding at a popular hill as a test one winter after losing a lawsuit, but decided to allow it again after most people ignored the restriction.

Instead, the city has posted signs warning of sledding risks and workers at the site of the failed ban put pads around posts and hay bales around trees. Mumgaard said courts in Nebraska have decided cities must protect people, even if they make poor choices.

The above seems like a far more reasonable response than an outright ban.

Most people realize that cities must restrict potentially dangerous activities to protect people and guard against costly lawsuits, said Kenneth Bond, a New York lawyer who represents local governments. In the past, people might have embraced a Wild West philosophy of individuals being solely responsible for their actions, but now they expect government to prevent dangers whenever possible.

I’ll tell you what. If we’ve lost our national spirit to such a degree that we truly agree with Mr. Bond’s sentiments, then we are in much bigger trouble than I imagined. That said, I’m not convinced his conclusions are representative. True, his words may reflect the sentiment of a New York lawyer, but I believe the frontier spirit still remains alive and well in many parts of the nation, albeit admittedly a bit suppressed and latent at the moment.

While the AP story largely blames the sled banning trend on litigation fears, a writer at The Economist takes a slightly different tack. One that I happen to agree with. For example:

This crackdown on unregulated sledding seems of a piece with the recent American tendency to curb marginally perilous childhood pleasures, such as tricycling without body armour or venturing alone into the back garden without a Mossad-trained security detail. Restrictions on sledding, which often takes place on municipal lands, at least have an apparently clear public basis: fear of city-budget sapping lawsuits.

Several years ago my colleague, striking a similar note, lamented that liability concerns are taking the fun out of American public swimming holes and playgrounds, and endorsed the somewhat saner balance of risk and regulations he enjoys as a resident of the Netherlands. In response, Kevin Drum of Mother Jones drew up a broad-brush list of differences between American and European legal systems, which would seemingly account for why Americans are suing themselves into a society of guardrail-happy worry-warts.

All this seems to help explain the putative difference between America and its European peers. But does this difference really exist? According to a study by Mark Ramseyer of Harvard Law School and Eric B. Rasmusen at Indiana University’s Kelley School of Business, “Americans do not file an unusually high number of law suits. They do not employ large numbers of judges or lawyers. They do not pay more than people in comparable countries to enforce contracts.

Perhaps this is not as surprising as it may seem. Americans are not so much unusually litigious as unusually fearful, and this fearfulness extends to the prospect of lawsuits. The occasional jaw-dropping award in a personal injury or class-action lawsuit creates, like the occasional terrorist attack, a salient sense of pervasive danger. It’s not that Dubuque or Des Moines suddenly faces a new and extraordinary risk of getting sued into oblivion. It’s just that the risk, as small as it is, now looms larger in the imagination, becoming too great for the no-longer-bold American spirit to bear. Shutting down sledding hills is inspired by the same sort of simpering caution that keeps Americans shoeless in airport security lines and, closer to home, keeps parents from letting their kids walk a few blocks to school alone, despite the fact that America today is as safe as the longed-for “Leave It to Beaver” golden age.

As an American (and Iowan!) I find this sort of flinching risk-aversion profoundly embarrassing. We might like to locate the blame for things like sledding bans somewhere out there in the unruly tort system (and indeed Messrs Ramseyer and Rasmusen do), but we must face the possibility that the blame also lies within. Perhaps it’s better to be safe than sorry, but one wonders whether we won’t become sorry to have made such a fetish of staying safe.

For more articles on America’s progression toward a cowering, addled nanny-state, read:

1 thought on “A Winter Wonderland of Fear – Cities Across the U.S. Move to Ban Unregulated Sledding”