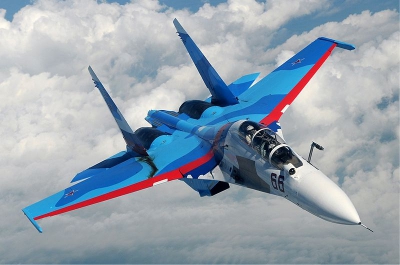 Stubby wings (that reduce lift and maneuverability), a bulbous fuselage (that makes it less aerodynamic) low speed and a super hot engine (which a half decent radar can identify) are just a few of the major flaws that will expose its vulnerability during air combat.

With more than 600 Flankers (Sukhoi-27s and its later iterations such as the Su-30, Su-34 and Su-35 Super Flanker) flying with air forces around the world, the fate of the fifth generation F-35 seems decidedly uncertain. Aerospace experts across the world are veering around to the view that America’s most expensive fighter development program (pegged at $1.5 trillion) will be a sitting duck for the flankers.

“It’s a turkey,” declares aerospace engineer Pierre Sprey in an interview to Dutch television. Few people are as qualified to speak about fighter aircraft as Sprey. He is the co-designer of the F-16 Falcon jet and the A-10 Warthog tank buster, two of the most successful aircraft in the US Air Force (USAF).

Winslow T. Wheeler, Director of the US’ Straus Military Reform Project, Centre for Defense information, agrees. “The F-35 is too heavy and sluggish to be successful as a fighter,” he says. “If we ever face an enemy with a serious air force we will be in deep trouble.”

So far the US has been lucky it has never really encountered a “serious” military. Over the skies of war-weary Iraq, tiny Libya and utterly defenseless Afghanistan, the American aircraft operated with impunity. But luck can run out – if they ever come up against the air forces of Russia, China or India the outcome won’t be so one-sided. In particular, the Indian Air Force has beaten the USAF’s fourth generation fighters using both third and fourth generation jets.

The biggest problem with the F-35 is that its US designers are betting on stealth and long range radar to compensate for its lack of speed and maneuverability. But stealth is not really all that it is cracked up to be; it is not the cloak of invisibility.

Plus, Russia’s already excellent radars are getting better. Says Defense Industry Daily (DID): “Meanwhile, key radar advances are already deployed in the most advanced Russian surface-to-air missile systems, and existing IRST (infra-red scan and track) systems deployed on advanced Russian and European fighters are extending enemy detection ranges against radar-stealthy aircraft. Fighter radar pick-up capability of up to (46km) by 2020 is proposed against even ultra-stealthy aircraft like the F-22, coupled with IRST ability to identify Advanced Medium-Range Air-to-Air Missile firings and less infrared-stealthy aircraft at (92km) or more.”

At the same time, there is no such thing as one radar in a war. “There are lots of radars,” Sprey explains. “And you can’t be nose-on or dead-level to every radar in the theater. There are always going to be radars that are going to be shining up (from below) or looking from above – they can all see you.”

Another issue is with the American aircraft’s overall shape. “Most great airplanes are beautiful because you are trying to reduce drag,” Sprey says. “But here because of stealth they had to make it very bulbous, very big as they had to carry the weapons inside because as soon as you carry the weapons outside they reflect radar. So this is a huge penalty to the performance of the aircraft which is now big and lumbering like a bomber.”

The USAF claims the F-35’s advanced radar will see the enemy aircraft first and be able to take it out with one of its four long-range AAMs. But BVR kills are still the stuff of dreams for fighter pilots and are quite rare.

In fact, the reliance on the radar acquisition and AAMS can prove suicidal – as indeed it was once upon a time. During the Vietnam War the USAF was so smitten with the concept of BVR combat that the first F-4 fighters were armed only with missiles. But after the Vietnamese Air Force pilots shot them down by the bucket load, the Americans reintroduced cannons in the F-4.

In fact, Russia, which has the most advanced and varied range of BVR missiles in the world, arms its Flankers with at least eight missiles for the simple reason that it takes several shots at a fast moving target to score a kill.

That the Americans ignored this basic lesson of air combat is mind boggling.

In theory, American pilots would play ‘video games’ and take out enemy aircraft at 1000 km. In practice, air combat is like a knife fight. According to DID, the F-35 is very likely to wind up facing many more “up close and personal” opponents than its proponents suggest, while dealing with effective BVR infrared-guided missiles as an added complication. Unlike the F-22, the F-35 is described as “double inferior” to modern Su-30 family fighters within visual range combat.”

The much larger and varied inventory of missiles combined with super-maneuverability, therefore, bestows the Flankers with an edge that’s unparalleled in modern air combat.

According to the new philosophy of air combat that is being defined by USAF-Lockheed-Martin careerists, the one-size-fits-all F-35 will replace all other fighters as well as ground support aircraft.

But here’s the rub. Because the F-35 is such an expensive aircraft, air forces will buy fewer units. For instance, Japan currently has 100 F-15s but it will replace them with just 70 F-35s. Again, because the F-35 will also be expensive to fly and maintain, air forces will limit pilot flying hours. (Already, spending cuts have forced the USAF to eliminate more than 44,000 flying hours and ground 17 combat air squadrons).

Besides, ‘stealth’ comes with a price. On the F-35 most of the maintenance is on the stealth coating. “It is a ludicrous impediment to combat,” Sprey says. “You are sitting on the ground for 50 hours fiddling on the aircraft trying to make it stealthy when it’s not stealthy anyhow.”

So if you are, say, the Australian air force, just 48 of your planned fleet of 70 F-35s will be battle ready at any given time. Your chances against the Chinese who have 400 Flankers are smaller than small. You can bet the Aussies won’t be joining the knife fight unless escorted by big brother USA.

Wheeler, who has dealt with US national security issues for over three decades, lays out the implications for western air forces planning to induct the F-35: “The pilots will get worse as they’ll get much less training, which is most important than any technical issue. There’ll be far fewer pilots as the whole force will have to shrink, and you will basically have a showpiece aircraft that can’t do anything. It’s useless, it’s truly monumentally useless, it will ruin any air force that uses it.”

The dogfight hasn’t yet started and the Flankers are up 1-0.