At the start of the New Year, there are increasing signs that the recovery seen in property prices in many cities in western countries — namely New York and other U.S. cities, and Dublin, London and other UK cities — is beginning to peter out.

Many cities have seen speculative frenzies return in recent months which led to price surges which would appear to be unsustainable – especially given the uncertain and poor geopolitical and economic backdrop.

This has been the case in the UK and Ireland, the U.S. and indeed in Canada, Australia, New Zealand and a few other markets.

The question at the start of 2015, is whether we are likely to see continued price gains or falls. There are all the hallmarks of an echo bubble akin to the one that burst so painfully in the noughties.

In the UK, the respected Centre for Economic and Business Research (CEBR) has predicted a decline in British property prices this year. Prices rose 8.8%, on average, in 2014 with prices in London ballooning another whopping 20%. 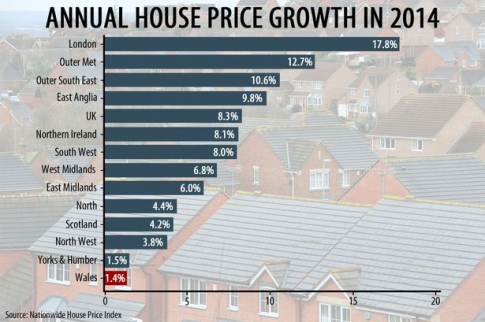 The CEBR, one of Britain’s leading forecasters, expects overall declines of around 0.6% with the London property bubble to burst and prices likely to fall around 8%.

With this forecast they are breaking ranks with banks, estate agents and the UK Treasury’s “independent” forecasting unit, the Office For Budget Responsibility (OBR). The OBR is touting another rise of 7.4% this year.

We would regard the CEBR’s outlook as the more credible. As covered here previously, London prices are unlikely to be sustained into the near future as Russian, Chinese and Arab money is no longer gushing into the London property market. Also, average homes in average areas are now beyond the reach of working husbands and wives on average and even good incomes.

Overall, new rules over mortgage lending and a glut of sellers have stalled the rise of London and UK house prices.

Other evidence also points to price falls. Zoopla, the respected property website has said one third of all UK properties on sale today have seen their asking price lowered at least once since coming on to the market.

Another longer-term factor which should begin to weigh in on the side of declining prices is potential rises in interest rates globally.

In the UK, the current, unsustainably low level of near 0 percent is likely to come under pressure soon. Bank of England governor, Mark Carney, indicated early last year that he expected rates to rise to 3 percent within three years. 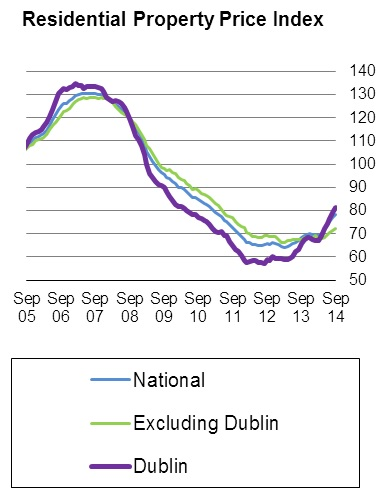 However, prices remain substantially higher than a year previously as a result of another surge in prices in the first nine months of the year. Prices also remains multiples of levels seen in the early 2000s.

Annual inflation in the capital has eased from a high of a very large 25pc in September to 20pc in December.

As in the UK, sentiment appears to be shifting and potential house buyers may have lowered their expectations of the amount they can borrow in light of a proposed Central Bank of Ireland measure to prudently place limits on mortgage lending.

Concerns about the impact of the geopolitical crisis with Russia on the European economy and the return of the Eurozone debt crisis may also be impacting sentiment.

In the U.S., the Case-Shiller home price index, released on December 30 showed U.S. single family home price appreciation slowed less than forecast in October and there are signs that certain markets are topping out. 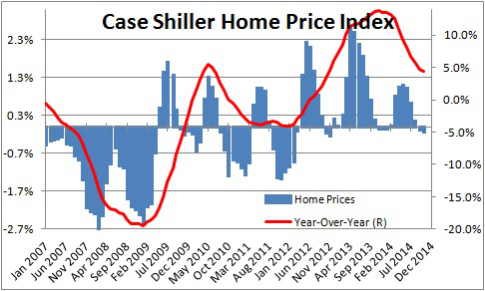 What many fail to realise is that the “normal” very low interest rates of the last fifteen years are actually and absurd historic anomaly. Prior to the dot-com collapse interest rates in the West averaged and were regarded as normal at around 6 percent to 7 percent.

A sixfold rise in rates from 0.5% to a meagre 3% would devastate home buyers in many countries internationally.

Since the dot-com crash the West has adhered to the Greenspan model of ultra-low rates to stoke consumption and asset speculation through cheap credit. Savers and pensioners have been punished in order to protect the interests of debtors including over leveraged banks.

Zero percent interest rates or ZIRP for an extended period have discouraged saving and encouraged reckless lending, borrowing and speculation. Previously, rates were determined primarily in the bond markets and not by central bank diktat.

This has contributed to the very precarious financial and monetary situation we find ourselves in today.

The ability of central banks to determine rates cannot last indefinitely. Rate rises are on the cards in the U.S. and globally. This may not occur in the short term as there is the potential for renewed QE in the U.S., but it will happen in the medium and long term.

Should the U.S. be forced to renew QE, it has the potential to create a dramatic loss of faith in the dollar as reserve currency and could result in capital flight. This in turn may force the U.S. and other western countries to raise rates despite the very negative impact that would inflict on property and stock markets.

Easy money has inflated property prices throughout the world. House prices are losing touch with reality again. Sentiment appears to be changing.

Beware of the property froth and prepare for the economic pain when prices begin to fall.

1 thought on “Prepare for Property Prices to Fall Globally”