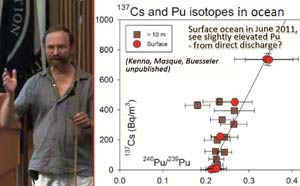 2014 Conference on Radioecology and Environmental Radioactivity (final link at bottom of page), K. Buesseler, E. Black, and S. Pike of Woods Hole Oceanographic Institution; T. Kenna of Lamont-Doherty Earth Obseratory; P. Masqué of Autonomous University of Barcelona, Sept 12, 2014 (emphasis added): Plutonium Isotopes In The Ocean Off Japan After Fukushima — The Fukushima Dai-ichi nuclear power plants (NPPs) are known to be an unprecedented accidental source of 137Cs, 134Cs and other volatile radionuclides to the ocean. Much less is known however about the extent of input of refractory radionuclides such as plutonium to the environment. Limited available data from land soils and vegetation, suggest at least some atmospheric delivery of particulate Pu… In 2011, in surface ocean waters, we found ratios 240Pu/239Pu >0.3, which implies a component of Fukushima Pu had been delivered to the ocean… Fukushima derived Pu was not found deeper in the water column.

1 thought on “VIDEO: Fukushima corium found in Pacific — Flowing into ocean after hydrogen dissolves nuclear fuel — Scientist: We’ve actually seen plutonium floating on surface; “We have no control over this accident… they’ve got leaks everywhere””