US filmmaker Oliver Stone is currently engaged in production of a documentary about Ukrainian president Viktor Yanukovych, who fled the country following the February coup last year. As Sputnik reports, Stone’s Facebook page notes, “[I] Interviewed Viktor Yanukovych 4 hours in Moscow for new English language documentary produced by Ukrainians. He [Yanukovych] was the legitimate President of Ukraine until he suddenly wasn’t on February 22 of this year.” The outspoken director then added, “the truth is not being aired in the West… many believe foreign elements were introduced by pro-Western factions with CIA fingerprints on it.” 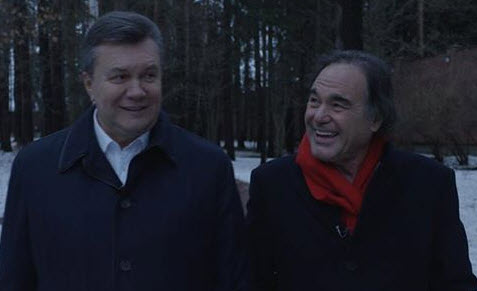 Excuse my absence these past weeks. A combination of overwork, prepping the Snowden movie in Germany & England, a side trip to Moscow, and a devastating head cold have laid me low. Recovering over Christmas in California; winter sun helps.

Interviewed Viktor Yanukovych 4 hours in Moscow for new English language documentary produced by Ukrainians. He was the legitimate President of Ukraine until he suddenly wasn’t on February 22 of this year. Details to follow in the documentary, but it seems clear that the so-called ‘shooters’ who killed 14 police men, wounded some 85, and killed 45 protesting civilians, were outside third party agitators. Many witnesses, including Yanukovych and police officials, believe these foreign elements were introduced by pro-Western factions– with CIA fingerprints on it.

Remember the Chavez ‘regime change’/coup of 2002 when he was temporarily ousted after pro and anti-Chavez demonstrators were fired upon by mysterious shooters in office buildings. Also resembles similar technique early this year in Venezuela when Maduro’s legally elected Government was almost toppled by violence aimed at anti-Maduro protestors. Create enough chaos, as the CIA did in Iran ‘53, Chile ‘73, and countless other coups, and the legitimate Government can be toppled. It’s America’s soft power technique called ‘Regime Change 101.’

In this case the “Maidan Massacre” was featured in Western media as the result of an unstable, brutal pro-Russian Yanukovych Government. You may recall Yanukovych went along with the February 21 deal with opposition parties and 3 EU foreign minsters to get rid of him by calling for early elections. The next day that deal was meaningless when well-armed, neo-Nazi radicals forced Yanukovych to flee the country with repeated assassination attempts. By the next day, a new pro-Western government was established and immediately recognized by the US (as in the Chavez 2002 coup).

A dirty story through and through, but in the tragic aftermath of this coup, the West has maintained the dominant narrative of “Russia in Crimea” whereas the true narrative is “USA in Ukraine.” The truth is not being aired in the West. It’s a surreal perversion of history that’s going on once again, as in Bush pre-Iraq ‘WMD’ campaign. But I believe the truth will finally come out in the West, I hope, in time to stop further insanity.

For a broader understanding, see Pepe Escobar’s analysis “The new European ‘arc of instability,’” which indicates growing turbulence in 2015, as the US cannot tolerate the idea of any rival economic entity. You might also see “Untold History” Chapter 10 where we discuss the dangers of past Empires which did not allow for the emergence of competing economic countries.

1 thought on “Oliver Stone’s New Movie: “Ukraine: The CIA Coup” Coming To A Theater Near You”