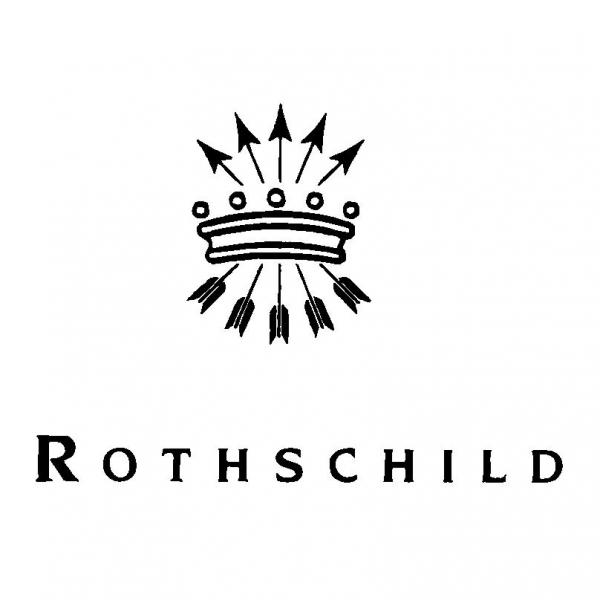 Who is to blame for the staggering collapse of the price of oil?  Is it the Saudis?  Is it the United States?  Are Saudi Arabia and the U.S. government working together to hurt Russia?  And if this oil war continues, how far will the price of oil end up falling in 2015?  As you will see below, some analysts believe that it could ultimately go below 20 dollars a barrel.  If we see anything even close to that, the U.S. economy could lose millions of good paying jobs, billions of dollars of energy bonds could default and we could see trillions of dollars of derivatives related to the energy industry implode.  The global financial system is already extremely vulnerable, and purposely causing the price of oil to crash is one of the most deflationary things that you could possibly do.  Whoever is behind this oil war is playing with fire, and by the end of this coming year the entire planet could be dealing with the consequences.

Ever since the price of oil started falling, people have been pointing fingers at the Saudis.  And without a doubt, the Saudis have manipulated the price of oil before in order to achieve geopolitical goals.  The following is an excerpt from a recent article by Andrew Topf…

We don’t have to look too far back in history to see Saudi Arabia, the world’s largest oil exporter and producer, using the oil price to achieve its foreign policy objectives. In 1973, Egyptian President Anwar Sadat convinced Saudi King Faisal to cut production and raise prices, then to go as far as embargoing oil exports, all with the goal of punishing the United States for supporting Israel against the Arab states. It worked. The “oil price shock” quadrupled prices.

It happened again in 1986, when Saudi Arabia-led OPEC allowed prices to drop precipitously, and then in 1990, when the Saudis sent prices plummeting as a way of taking out Russia, which was seen as a threat to their oil supremacy. In 1998, they succeeded. When the oil price was halved from $25 to $12, Russia defaulted on its debt.

The Saudis and other OPEC members have, of course, used the oil price for the obverse effect, that is, suppressing production to keep prices artificially high and member states swimming in “petrodollars”. In 2008, oil peaked at $147 a barrel.

Turning to the current price drop, the Saudis and OPEC have a vested interest in taking out higher-cost competitors, such as US shale oil producers, who will certainly be hurt by the lower price. Even before the price drop, the Saudis were selling their oil to China at a discount. OPEC’s refusal on Nov. 27 to cut production seemed like the baldest evidence yet that the oil price drop was really an oil price war between Saudi Arabia and the US.

If the Saudis wanted to stabilize the price of oil, they could do that immediately by announcing a production cutback.

The fact that they have chosen not to do this says volumes.

In addition to wanting to harm U.S. shale producers, some believe that the Saudis are determined to crush Iran.  This next excerpt comes from a recent Daily Mail article…

Above all, Saudi Arabia and its Gulf allies see Iran — a bitter religious and political opponent — as their main regional adversary.

They know that Iran, dominated by the Shia Muslim sect, supports a resentful underclass of more than a million under-privileged and angry Shia people living in the gulf peninsula — a potential uprising waiting to happen against the Saudi regime.

The Saudis, who are overwhelmingly Sunni Muslims, also loathe the way Iran supports President Assad’s regime in Syria — with which the Iranians have a religious affiliation. They also know that Iran, its economy plagued by corruption and crippled by Western sanctions, desperately needs the oil price to rise. And they have no intention of helping out.

The fact is that the Saudis remain in a strong position because oil is cheap to produce there, and the country has such vast reserves. It can withstand a year — or three — of low oil prices.

There are others out there that are fully convinced that the Saudis and the U.S. are actually colluding to drive down the price of oil, and that their real goal is to destroy Russia.

“Did you know there’s an oil war? And the war has an objective: to destroy Russia,” he said in a speech to state businessmen carried live on state TV.

“It’s a strategically planned war … also aimed at Venezuela, to try and destroy our revolution and cause an economic collapse,” he added, accusing the United States of trying to flood the market with shale oil.

Venezuela and Russia, which both have fractious ties with Washington, are widely considered the nations hardest hit by the global oil price fall.

And as I discussed just the other day, Russian President Vladimir Putin seems to agree with this theory…

“We all see the lowering of oil prices. There’s lots of talk about what’s causing it. Could it be an agreement between the U.S. and Saudi Arabia to punish Iran and affect the economies of Russia and Venezuela? It could.”

Without a doubt, Obama wants to “punish” Russia for what has been going on in Ukraine.  Going after oil is one of the best ways to do that.  And if the U.S. shale industry gets hurt in the process, that is a bonus for the radical environmentalists in Obama’s administration.

There are yet others that see this oil war as being even more complicated.

Marin Katusa believes that this is actually a three-way war between OPEC, Russia and the United States…

Katusa doesn’t see production slowing in 2015: “We know that OPEC will not be cutting back production. They’re going to increase it. Russia has increased production to all-time highs.” With Russia and OPEC refusing to give up market share how will the shale industry compete?

Katusa thinks the longevity and staying power of the shale industry will keep it viable and profitable. “The versatility and the survivability of a lot of these shale producers will surprise people. I don’t see that the shale sector is going to collapse over night,” he says. Shale sweet spots like North Dakota’s Bakken region and Texas’ Eagle Ford area will help keep production levels up and output steady.

Whatever the true motivation for this oil war is, it does not appear that it is going to end any time soon.

And so that means that the price of oil is going to go lower.

Few saw the energy meltdown coming. Now that it’s here, industry analysts warn another move lower is possible as the momentum remains firmly to the downside.

“If this doesn’t hold, we could go back to price levels in late 2008 and early 2009 — down in the $30s. There’s no reason why it couldn’t happen,” said Darin Newsom, senior analyst at Telvent DTN.

Revisiting the past year’s predictions is, for most columnists a frequently humbling experience. The howlers tend to far outweigh the successes. Yet, for a change, I can genuinely claim to have got my main call for markets – that oil would sink to $US80 a barrel or less – spot on, and for the right reasons, too.

Just in case you think I’m making it up, this is what I said 12 months ago: “My big prediction is for $US80 oil, from which much of the rest of my outlook for the coming year flows. It’s hard to overstate the significance of a much lower oil price – Brent at, say, $US80 a barrel, or perhaps lower still – yet this is a surprisingly likely prospect, the implications of which have been largely missed by mainstream economic forecasters.”

If on to a good thing, you might as well stick with it; so for the coming year, I’m doubling up on this forecast. Far from bouncing back to the post crisis “normal” of something over $US100 a barrel, as many oil traders seem to expect, my view is that the oil price will remain low for a long time, sinking to perhaps as little as $US20 a barrel over the coming year before recovering a little.

But even Warner’s chilling prediction is not the most bearish.

No one really saw 2014’s dramatic plunge in oil price coming, so it’s probably fair to say that any predictions about where it’s going from here fall somewhere between educated guesses and picking a number out of a hat.

In that light, it’s less than shocking to see one analyst making a case—albeit in a pure outlier sense—for a drop all the way below $14 a barrel.

Abigail Doolittle, who does business under the name Peak Theories Research, posits that current chart trends point to the possibility that crude has three downside target areas where it could find support—$44, $35 and the nightmare scenario of, yes, $13.65.

But the truth is that none of those scenarios need to happen in order for this oil war to absolutely devastate the U.S. economy and the U.S. financial system.

There is a very strong correlation between the price of oil and the performance of energy stocks and energy bonds.  But over the past couple of weeks this correlation has been broken.  The following chart comes from Zero Hedge… 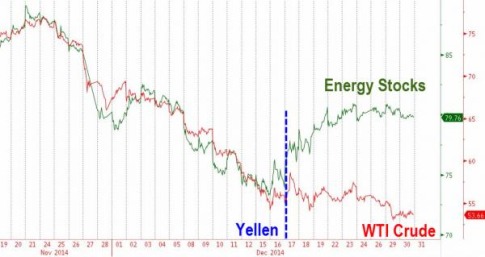 It is inevitable that at some point we will see energy stocks and energy bonds come back into line with the price of crude oil.

And it isn’t just energy stocks and bonds that we need to be concerned about.  There is only one other time in all of history when the price of oil has crashed by more than 50 dollars in less than a year.  That was in 2008 – just before the great financial crisis that erupted in the fall of that year.  For much, much more on this, please see my previous article entitled “Guess What Happened The Last Time The Price Of Oil Crashed Like This?…”

Whether the price of oil crashed or not, we were already on the verge of massive financial troubles.

But the fact that the price of oil has collapsed makes all of our potential problems much, much worse.

As we enter 2015, keep an eye on energy stocks, energy bonds and listen for any mention of problems with derivatives.  The next great financial crisis is right around the corner, but most people will never see it coming until they are blindsided by it.