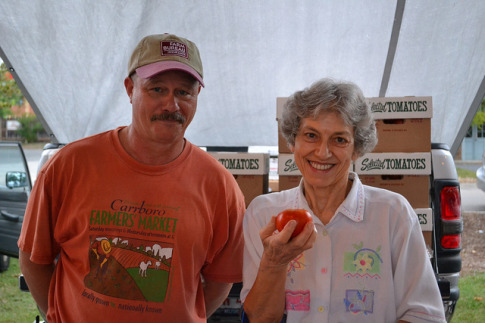 Carla Shuford grew up on a small dairy farm in North Carolina. Though the organic movement was not as established as it is today, in the mid-1950s her father decided to stop using pesticides in his garden in favor of adopting organic farming practices.

Though in retrospect it seems incredibly prescient, her father had no idea yet that this decision would become instrumental in saving his daughter’s life.

In 1958, at age 15, Carla Shuford was diagnosed with osteogenic sarcoma, which had metastasized to her lymph nodes. Osteogenic sarcoma is the second most common type of primary bone cancer, which typically presents in the leg or shoulder. It is most commonly diagnosed in children and adolescents.

The doctors did not feel that radiation would be helpful in her case, and instead opted for radical surgery, amputating Carla’s leg at the hip. Despite the surgery, Carla received a grim prognosis: her doctors told her she had six months to live.

Carla’s mother, unwilling to give up hope just yet, rushed to New York to meet with Dr. Max Gerson. Carla said:

“Although it would have been preferable for me to be a resident of Dr. Gerson’s New York clinic, circumstance made that impossible. Because of the extreme demands of time, energy, and the difficulty of acquiring toxin-free foods, along with the thoroughness and exactness that the program required, Dr. Gerson was reluctant for patients to handle the treatment at home, especially in the beginning stages.

However, he was impressed with my mother’s intelligence and untiring dedication to detail. In return for his trust, she made him the promise that she would follow his prescribed regimen to the letter.”

Carla’s mother stuck to her promise, and her family devoted five years to Carla’s round-the-clock care. Her father’s organic garden provided some of the food she needed for juicing and meals, but there were crops that Carla needed that her father’s garden did not provide.

So, Carla’s father went to other farmers in the area, and asked them to allocate portions of their gardens to be pesticide-free for Carla’s use. While the Shuford’s neighbors did not share his interest in organic farming, they were happy to help, and dedicated pesticide-free patches in their gardens to Carla for her treatment. Thanks to her neighbors’ cooperation, Carla was able to procure all her needed produce for the duration of her five years on the therapy. 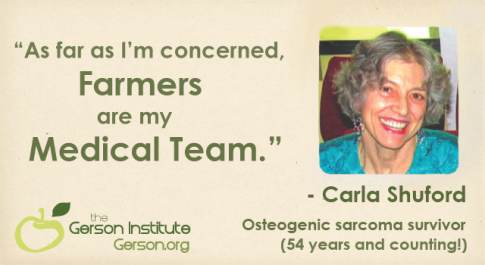 Carla received a death sentence from her doctors back in 1958, yet she is still alive and well, and will soon turn 69. Carla remains on a strictly organic diet, and enjoys swimming daily. She is an active member in her local organic community in Chapel Hill, North Carolina.

Last year, she gave an interview for a project documenting the Carrboro Farmers’ Market for the Southern Foodways Alliance, and spoke of her experience on the Gerson diet, and how it has led to a lifelong passion for organic produce. Enjoy Carla’s interview below:

More on the Gerson Therapy:

– A Cancer Therapy: Results of Fifty Cases and the Cure of Advanced Cancer