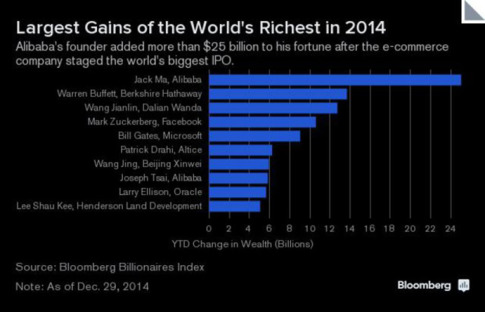 The 400 richest billionaires in the world added another $92 billion to their names in 2014 and now sit on assets worth $4.1 trillion, but Russia’s super-wealthy have been hit by economic problems resulting from the Ukraine crisis.

Ma, who has a personal fortune of $28.7 billion, has added $25.1 billion to his wealth since the September initial public offering saw shares surge by 56 percent.

Other big winners in 2014 were Warren Buffett and Mark Zuckerberg. Buffet increased his net worth by $13.7 billion as dozens of businesses he had brought over the past five decades produced record profits.

Zuckerberg, who founded Facebook, the world’s largest social networking company, added $10.6 billion to his cash pile. Facebook has flourished this year as advertising increased and marketing initiatives expanded, and the 2012 acquisition of Instagram has also paid off; with the photo sharing app now worth $35 billion.

Bill Gates, the founder of Microsoft, remains the world’s richest man with an $87.6 billion personal fortune, up $9.1 billion this year.

The Majority of Russia’s billionaires have seen their fortunes shrink this year, as the EU and the US imposed sanctions and limited Russian companies’ access to financing from Western banks, as a result of the crisis in Ukraine.

Vladimir Yevtushenkov, the main shareholder in the Russian conglomerate AFK Sistema, was hardest hit. Once Russia’s 14th richest man, he lost 80 percent of his wealth after a money laundering investigation into the $2.5 billion purchase of oil producer Bashneft, which saw him sentenced to house arrest.

Leonid Mikhelson, the CEO of Novatek, Russia’s second largest natural gas producer, was the biggest loser in terms of dollars. He has lost $7.8 billion since the beginning of the year and is now worth $10.1 billion.

Alisher Usmanov dropped from first place and is now Russia’s second richest person after his MegaFon mobile phone company lost almost half of its value since June. Viktor Vekselberg is currently Russia’s richest person and is worth $14.1 billion.

Oleg Deripaska, an aluminum billionaire who owns Rusal was one of a handful of Russians who saw their fortune grow in 2014, adding $1.6 billion to Rusal and increasing his worth to $8.2 billion.

Stanislav Belkovsky, a former Kremlin adviser who is a now a consultant for Moscow’s Institute for National Strategy, said that this will make it harder for Russians doing business in the West.

“The reputation of Russian business in the West has become worse, and will continue to get worse. That means that the capabilities for Russia’s billionaires to run businesses abroad are going to decrease,” he told Bloomberg.