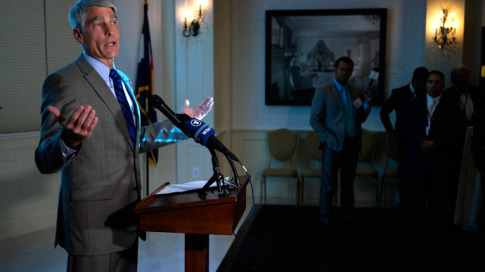 Calls for Sen. Mark Udall (D-Colorado) to reveal the entire, unredacted CIA torture report have increased, with a group of former intelligence analysts issuing a memo that urges the outgoing legislator to read the report on the Senate floor.

Veteran Intelligence Professionals for Sanity (VIPS) released the letter, asking Udall to use his constitutional protection as a still-sitting member of Congress to introduce the full 6,000-plus-page report by the Senate Intelligence Committee into the congressional record by reading it on the Senate floor. The current versionis heavily redacted.

“We, the undersigned are veteran intelligence officers with a combined total of over 300 years of experience in intelligence work,” the letter begins. “We send you this open letter at what seems to be the last minute simply because we had been hoping we would not have to.”

“You seem on the verge of leaving the Senate without letting your fellow Americans know all they need to know about CIA torture,” the memo continues. “In the eight weeks since you lost your Senate seat you gave off signs that, during your last days in office, you would provide us with a fuller account of this sordid chapter in our country’s history, exercising your right to immunity under the “Speech or Debate” clause in Article 1 of the Constitution.”

VIPS is not the first to call on Udall to introduce the unredacted report into the congressional record. On November 5 ‒ the day after the incumbent senator lost his re-election bid to Republican Rep. Cory Gardner, and over a month before the Intelligence Committee published their findings ‒ Trevor Timm wrote an op-ed in the Guardian urging the “lame-duck transparency advocate” to grab the “rare opportunity to truly show his principles in the final two months of his Senate career and finally expose, in great detail, the secret government wrongdoing he’s been criticizing for years.”

The Speech or Debate clause in the US Constitution states that so long as legislators are “acting in the sphere of legitimate legislative activity,” they are “protected not only from the consequence of litigation’s results but also from the burden of defending themselves” from retribution from the government’s executive branch.

The senator has said he is considering the option.

“Transparency and disclosure are critical to the work of the Senate intelligence committee and our democracy, so I’m going to keep all options on the table to ensure the truth comes out,” Udall told the Denver Post in an interview.

“I mean, I’m going to keep all options on the table,” said Udall, when asked specifically about using his position in Congress to reveal the unredacted document.

Udall would not be the first to use his constitutional immunity to reveal classified materials on the Senate floor. In 1971, then-Sen. Mike Gravel (D-Alaska) released the Pentagon Papers – the secret official study that revealed the lies and manipulations of successive US administrations that misled the country into the Vietnam War. His action was in response to the Nixon administration’s move to block any further publication of the report and to punish any newspaper publisher who revealed the contents, after The New York Times published portions of the leaked study.

“From the floor of the senate, Gravel (a junior senator at the time) insisted that his constituents had a right to know the truth behind the war and proceeded to read 4,100 pages of the 7,000 page document into the senate [sic] record,”the biography on his website reads.

Gravel’s recitation lasted for three hours before he almost collapsed. He then entered thousands of more pages into the record after he couldn’t speak any longer from exhaustion.

The former Alaskan senator has also joined the calls for Udall to follow in his footsteps.

“If Udall wants to call me, I can explain this to him,” Gravel told the Intercept in early November. “What he’d have to do is call a subcommittee meeting like I did, late at night.”

The two biggest reasons not to do it, Gravel said, are no longer relevant.

“The biggest fear you have is peer pressure: What are my members of the Senate going to think of me? But I’ve got to say, if you lose office, like he has, he’s got no more peer pressure,” he said.

The Senate has rules against disclosing classified information, and could punish Udall with “censure, removal from committee membership, or expulsion from the Senate.”

Since Udall was already voted out of office, none of those punishments would affect him, Gravel noted.

Transparency advocates hoped that Udall would use his December 10 speech on the Senate floor, as Timm wrote, to “go out with a bang.” Instead, he blasted both the CIA and the White House over what the lawmaker considers to be complicity with regards to propagating long-standing lies about the United States’ use of torture against foreign detainees.

Udall’s last day as a US senator will be January 2. The 114th Congress begins the following day.