Ennio Morricone – Ecstasy of Gold (The Good, the Bad, the Ugly) 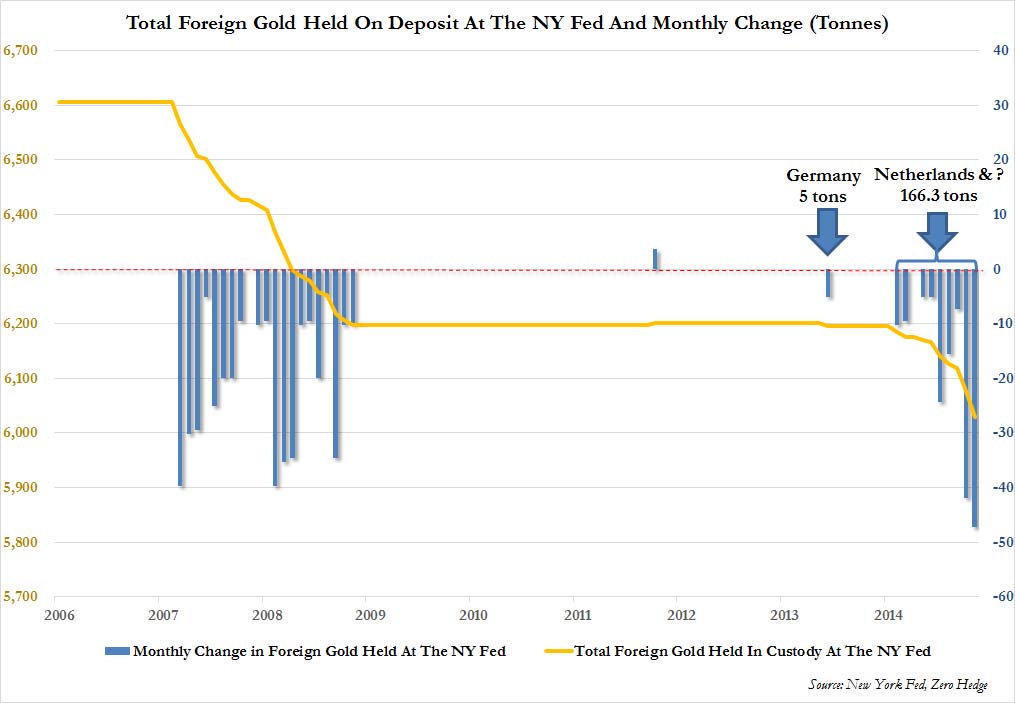 Exactly one month ago we observed that, as expected in the aftermath of the Netherlands’ shocking and still not fully-explained gold repatriation from the NY Fed, the amount of foreign earmarked gold on deposit with the Fed had just experienced a 42 ton withdrawal: the single largest outflow of gold held at the NY Fed in over a decade, going back all the way to 2001. This had brought the total amount of YTD gold withdrawals from the NY Fed to a whopping 119 tons: the most since the Lehman collapse.

However, because this total was insufficient to cover just the Dutch repatriation of gold from the NY Fed (which amounted to 122 tons), we knew there would be more activity when the November data hit. Sure enough, earlier today the Fed reported the total amount of earmarked gold (or gold “held in foreign and international accounts and valued at $42.22 per fine troy ounce; not included in the gold stock of the United States“) for the month of November: at $8.184 billion, this was a $60 million drop from the previous month (or it would be at the $42.22/ounce “price”; at market prices the value of the withdrawn gold is about $1.7 billion).

In actual tonnage terms, this means that in November some 47.1 tons of gold were withdrawn from the NY Fed, bringing the Fed’s total earmarked gold to just 6,029 tonnes: the biggest single monthly outflow going back to the turn of the century. This is also the lowest amount of gold held at the NY Fed vault located at 33 Liberty street (and just across from the even bigger vault located at 1 Chase Manhattan Plaza) in the 21st century.

But even more notable is that with the November data, we now know that all of the Dutch repatriated gold is fully accounted for.

Which brings up a far more important question: net of the Netherlands withdrawals, there is some 44 tons of extra gold that has been also quietly redeemed (by another entity). The question is who: is it now the turn of Austria to reveal in a few weeks that it too, secretly, withdrew some 40+ tons of gold from “safe keeping” in the US? Or was it Belgium? Or did the Dutch simply decide to haul back some more. Or did Germany finally get over its “logistical complications” which prevented it from transporting more than just a laughable 5 tons in 2013? And most importantly, did Germany finally grow a pair and decide not to let “diplomatic difficulties” stand between it and its gold?

We should have the official answer shortly, but we know one thing: it sure wasn’t Ukraine.