China may have mastered the art of fabricating economic data to a level unmatched by anyone except the US Department of Labor, but its derivative countries have much to learn. And none other more so than one of China’s favorite sources of commodities over the past decade: Brazil. It is here that things are going from worse to catastrophic, as disclosed in today’s update of Brazil’s fiscal picture.

Here are the disturbing facts showing that behind the world’s propaganda growth facade, it is all hollow: Brazil’s consolidated public sector primary fiscal balance, which posted a significantly worse than expected R$8.1bn primary deficit in November driven by the R$6.7bn deficit of the Central Government, dipped into negative territory: -0.18% of GDP, driven by the significant deterioration of the Central Government finances. 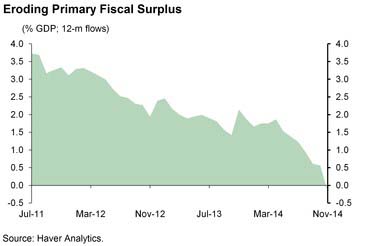 This is the worst fiscal outturn since November 1998. Furthermore, the primary surplus of subnational government (States and Municipalities) has also been eroding, a reflection of the authorizations given by the Treasury since 2011 for increased borrowing by the States. For instance, the States and Municipalities posted a negligible 0.08% of GDP surplus during Jan-Nov 2014, down from 0.46% of GDP during Jan-Nov 2013.

It gets worse: the overall public sector fiscal deficit widened to a very high 5.82% of GDP (the highest fiscal deficit since September 2003) given the high 5.64% of GDP net interest bill and steady erosion of the primary fiscal surplus. Given the BRL depreciation during the month, the interest on the stock of Dollar swaps issued by the central bank reached R$8.7bn.

The steady decline of the public sector savings rate is leading to a wider current account deficit despite weaker growth and low investment. In fact, the twin fiscal and current account deficits are now tracking at a combined, very troublesome 9.9% of GDP, the worst picture in 15 years (since September 1999). Repairing the severely unbalanced macro picture demands a deep fiscal and quasi-fiscal adjustment and a significantly weaker BRL. 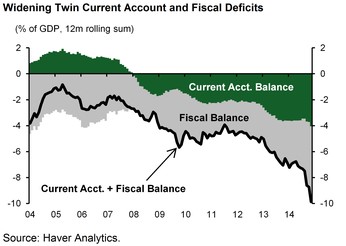 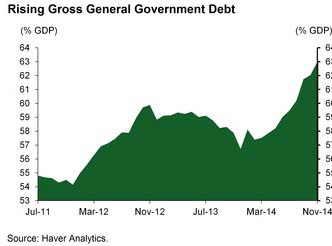 To summarize, in Goldman’s words

In other words, after Japan, this is merely the latest Keynesian success story. And now BTFATH in the S&P 500 because the US will, any minute now, decouple from the entire world.