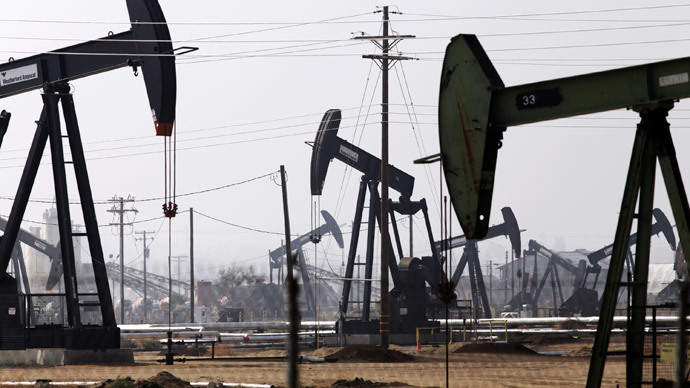 Thousands of recently highly paid workers have been laid off after the oil price plummeted 50 percent in 2014. At least four American oil-producing states are already facing budget problems due to decreasing oil revenues.

The price plunge has affected petroleum production in all oil-extracting countries, including the US.

Currently cheap fuel is still believed to be providing an overall boost to the US economy, as consumers can spend less on gasoline and more on shopping and services. But for the American energy sector the future looks less bright. It’s effecting places like Alaska, Louisiana, Oklahoma and Texas, the New York Times reports.

US oil experts recall the 1980s oil price downturn, accompanied by economic disasters around the globe and arguably becoming one of the causes of the fall of the Soviet Union. Some experts are positive and say America’s oil-producing states won’t suffer too much because they “diversified their economies.”

This doesn’t apply to the state of Alaska. According to the NYT, approximately 90 percent of state’s budget is formed from oil revenues. Alaska’s government is considering a 50 percent capital-spending cut for bridges and roads in the face of the oil price drop, with Moody’s, the credit rating service, lowering Alaska’s credit outlook from stable to negative.The state of Louisiana’s 2015-16 budget is going to be $1.4 billion short, with 162 state government positions already eliminated and more to be discontinued starting from January. Contracts and projects are being either reduced or frozen in state agencies. According to the state’s chief economist Greg Albrecht, for every $1 fall in price of an annual average barrel of oil, Louisiana loses $12 million.

For Texas, which has a far larger and more diversified economy than Louisiana, the oil price downturn is no good either. In just October and November Texas lost 2,300 oil and gas jobs, the federal Bureau of Labor Statistics reported last week. Through the last half a year the state has been losing $83 million in potential revenue every day, the Greater Houston Partnership recently reported. They blamed this on crashing price of its West Texas Intermediate crude oil, which has depreciated to $54.73 per barrel this week, from more than $100 six months ago.

The situation in other oil-extracting states could be even worse. In a study published last year, the Council on Foreign Relations warned the largest job losses caused by sharp decline in oil prices are going to take place in North Dakota, Oklahoma and Wyoming, where the number of drilling rigs is decreasing.

The US oil industry has showed 50 percent employment growth since the recession officially ended in mid-2009, giving jobs to over 779,000 people as of October 2014, the Wall Street Journal reported. A total of 10 million jobs have been associated with the US oil and gas industry, Mark Mills, a senior fellow at the Manhattan Institute, estimated.

Now according to Tom Runiewicz, a US industry economist at IHS Global Insight, if oil stays around $56 a barrel till the middle of the next year, companies providing services to oil and gas industry could lose 40,000 jobs by the end of 2015, while oil and gas equipment manufacturers could slash up to 6,000 jobs.

These workers can earn more than $1,700 a week, much higher than the average $848 a week payment for other workers, the WSJ reported. When experienced workers lose their highly paid jobs, they stop paying their bills.

There are also fears of a house-price slump. Fitch Ratings has already warned that with the price of oil continuing to plummet, home prices in Texas “may be unsustainable.”