Britain has inched out France as the world’s fifth-largest economy thanks to what The Telegraph calls “a shake-up” of the national accounts this summer. 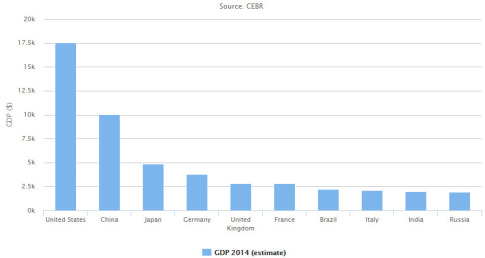 UK gross domestic product (GDP) is expected to total $2.828 trillion (£1.816 trillion) this year, compared with French GDP of $2.827 trillion, as The Centre for Economics and Business Research (CEBR) said Britain’s acceleration was boosted by the inclusion of sex and drugs to UK growth (as part of new pan-European accounting standards). Official estimates show prostitution added about £5.7bn to the UK economy in 2013, while illegal drugs were worth about £6.62bn. One question – how did they estimate it? 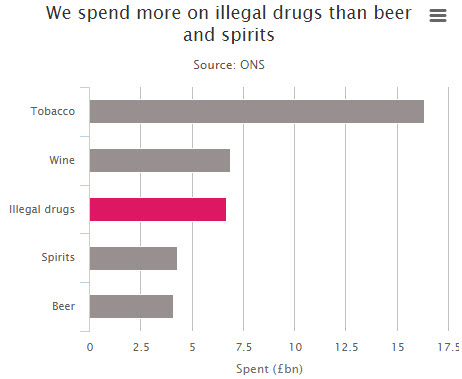 And more on “Hookers and Blow” than on Vegetables, Milk, or footwear… 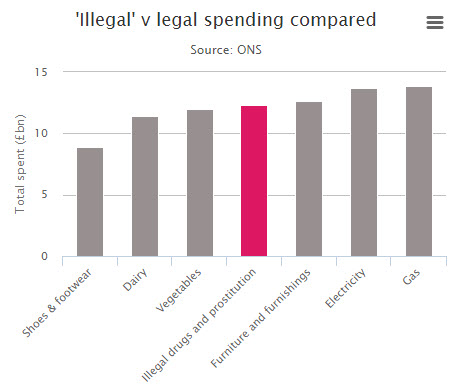 The ONS’s methodology for calculating how much prostitution is worth to the economy is based on extrapolating figures about the number of sex workers in London for the rest of the UK. However, this survey data, which is from 2004, excludes male prostitutes.

According to one estimate by Andrew Fogg, 42pc of all sex workers in the UK are male, making their omission a significant gap in the ONS’s calculations. Other economists have also labelled the attempts to estimate the size of illegal economic activity as little more than “guesswork”.

Brings a whole new meaning to the phrase “Buy British”

Britain is really getting it on in the ‘fun’ department: the prostitution and illegal drug industries have catapulted it past France to fifth place in the world economy tables. The sector seems to generally be a cure-all for economies in trouble.

These are the figures as reported in the latest global economic tables from the Centre for Economic and Business Research (CEBR).

The UK is generating £11 billion in the drugs and sex sector alone.

But while a number of Britons like to have a good laugh about overtaking the French in whatever sector, there is a factor that may put a damper on that: France doesn’t include drugs and prostitution in its GDP statistics. 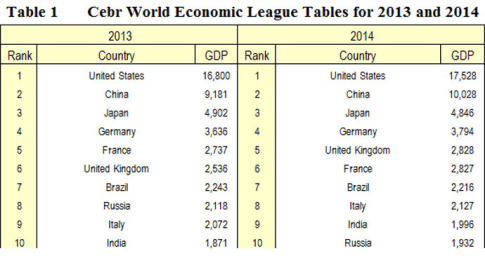 The Italians, however, do. And the Puerto Ricans are going as far as legalizing marijuana and prostitution simply tojump-start the economy, while Spain got a boost of 9 billio euro to its economy thanks to the illegal trades.

And as the CEBR also pointed out, Britons’ joy may be short-lived, as the French may snatch fifth place right back from them next year. As the London-based CEBR points out, France’s economy could still get larger, as the UK’s net worth is $2.852 trillion, and that is a tiny margin in such terms – France’s is only $1 billion smaller.

Another point to consider here is that drugs and prostitution are relatively arbitrary sectors, and don’t really guarantee that the standard of living will be different merely because of the resulting monetary figure in that sector. As Tom Worstall points out on Forbes, “[the sector] might be interesting if you wanted to be able to prance and preen as a minister in charge of such an economy, but it makes very little difference to how the people live, that being the important point at issue here.”

As for CEBR, it agrees that specific measurements may no longer impact the picture much soon. It claims we are entering a “mature phase” of globalization, which will culminate in 2030. By then, “a new order” of things will prevail.

The economic figures, though, also act as a trick to convince people in the financial markets that Britain is successful economically, Tony Gosling, an investigative journalist, told RT.

“We have [in Britain] now a million people visiting food banks; the fact of the matter is people don’t have the money to spend. The only recovery has been for the rich shareholders and investors in property and big assets. So this is a rather cheap con to make people think the economy is successful,” he said.

Gosling also said that the Chancellor George Osborne’s austerity program is self-harming because the vast majority of people have less money to spend.