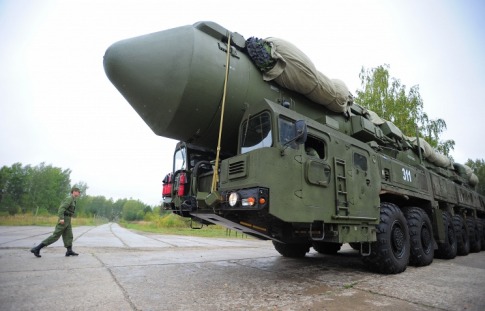 Last week, after the unanimous passage of the Ukraine Freedom Support Act of 2014 in Congress, which made legal the provision of US “lethal aid” to Kiev and which Russia blasted as an act of aggression and promised that it would merely accelerate the deterioration of relations between Russia and the west, we wrote that “World Awaits Russian Response As Obama Makes “Lethal Aid” To Ukraine Legal.” We didn’t have long to wait: one short hour ago, Putin adopted an updated version of its military doctrine, which “reflects the emergence of new threats against its national security” and which names both the NATO military buildup on Russia’s borders, as well as the US and the destabilized situation in some regions (read Ukraine) as the main foreign threats to Russian security. The doctrine update also, for the first time, put protection of Russian national interest in the Arctic (read oil and nat gas) among the key priorities for Russia’s armed forces.

In other words, Putin is not only not backing down, but has once again explicitly warned NATO that any western action, either in Ukraine or elsewhere, will have a proportional response.

Among the highlights of the new doctrine:

The new doctrine was approved on Friday by President Vladimir Putin. Its core remains unchanged from the previous version. The Russian military remains a defensive tool which the country pledges to use only as a last resort. Also unchanged are the principles of the use of nuclear weapons which Russia adheres to. Their primary goal is to deter potential enemies from attacking Russia, but it would use them to protect itself from a military attack – either nuclear or conventional – threatening its existence.

The new sections of the doctrine outline the threat Russia sees in NATO’s expansion and military buildup and the fact that the alliance is taking upon itself “global functions realized with violation of international law.” The doctrine lists among major foreign military threats “the creation and deployment of global strategic antiballistic missile systems that undermines the established global stability and balance of power in nuclear missile capabilities, the implementation of the ‘prompt strike’ concept, intent to deploy weapons in space and deployment of strategic conventional precision weapons.”

Another new point in the doctrine is that one of the Russian military’s goals is to protect national interests in the Arctic region.

The document also points to the threat of destabilization countries bordering Russia or its allies and deployment of foreign troops such nations as a threat to national security.

There was a token segment focusing on domestic threats to peace and stability:

Domestically, Russia faces threats of “actions aimed at violent change of the Russian constitutional order, destabilization of the political and social environment, disorganization of the functioning of governmental bodies, crucial civilian and military facilities and informational infrastructure of Russia,” the doctrine says. Moscow sees international cooperation with countries sharing its effort to increase security, particularly members of BRICS, the OSCE, the Shanghai Cooperation Organization and others as the key to preventing military conflicts, the doctrine states.

But the gist of the message was clearly focused on external developments because while the doctrine explicitly stated that “Prevention of nuclear war and any other type of conflict core to Russia’s military policies” and that “Moscow reserves right to use nuclear weapons if Moscow, its allies are under nuclear or non-nuclear attack”, just a few hours prior to the doctrine announcement, Russia’s intercontinental ballistic missile RS-24 Yars was test fired from the Plesetsk military cosmodrome in the country’s northwest, Russian Defense Ministry’s spokesman for the Strategic Missile Forces (RVSN) Colonel Igor Yegorov told TASS on Friday.

The missile’s dummy warheads with given accuracy hit a target at the Kura range in Kamchatka in the Russian Far East.

“On December 26, 2014 at 11:02 am, Moscow time, the solid-propellant RS-24 Yars mobile ground ICBM with a multiple warhead was test fired from the Plesetsk state test cosmodrome by a combined combat crew of the RVSN and Aerospace Defense Forces,” the official said.

Clear enough. Then again, now that Ukraine’s gold has been pillaged and the country’s economy in freefall, it wouldn’t be at all surprising if Kiev’s “allies” let the nation fend for itself and push it right back into the hands of Russia. After all, the plunging oil prices are causing enough hurt to the Kremlin where events in Ukraine are now largely irrelevant.