For the past few months, the one silver lining to the energy complex – with crude oil plummeting to levels not seen since 2009 – was nat gas, which soared to the mid-$4s in early November on expectations of a brutal polar vortex for the second year in a row sending heating demand surging. Well, so far the “harsh” weather, which was blamed for the epic collapse in the US economy in Q1 has not materialized, and all those buyers of natgas contracts have been scrambling to sell all of their exposure afraid they may suffer the same fate as their crude trading brethren. End result: as of moments ago, nat gas finally slide under $3, the first time it has done so since 2012! 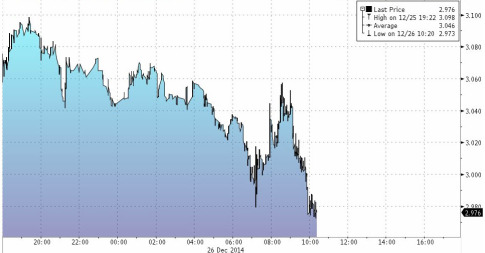 This also means that while crude oil longs have had a horrible year, with nat gas now down 29% in 2014, and headed for the first annual decline since 2011 as mild weather leaves stockpiles at a surplus to year-ago levels for the first time in two years, yet another commodity is set to ring in margin calls for all those who are not long the USDJPY, pardon the S&P500, where the only trade off to daily all time highs is simply the total collapse of Japan as a nation state.

And since temperatures will be mostly above average in the eastern half of the U.S. through Dec. 30, according to Commodity Weather Group LLC, look for gas to keep sliding. From  Bloomberg:

“We haven’t seen a lot of cold weather this winter,” said Carl Larry, a Houston-based director of oil and gas at Frost & Sullivan. “The warmer it stays, the more pressure on natural gas. Gas production is not dropping and demand is not that high.”

“This market continues to look oversupplied,” Aaron Calder, senior market analyst at Gelber & Associates in Houston, said by phone on Dec. 24. “We are seeing support at $3 but I would say that once we break that I think $2.70 is probably our lower technical target.”

“Unseasonably warm weather this month now necessitates extreme conditions ahead in order to avert a surplus,” Teri Viswanath, director of commodities strategy for the bank in New York, said in the report.

But while traders will be ok, the one industry that appears set to suffer the most is, once again, shale:

Output from the Marcellus shale formation in the Northeast may climb to 16.3 billion cubic feet a day in January, up 19 percent from a year earlier, the EIA said in its monthly Drilling Productivity Report on Dec. 8.

And now, since the Keynesian angle of “higher commodity prices mean more pent up demand and higher future growth” is finished, expect a major switch in the narrative to “deflation is actually good.” Because apparently Austrians are only wrong whenever their being right does not conflict with the official propaganda of making trillionaires out mere billionaires.