– Caught On Tape: What Happens When A California Driver Finally Snaps (ZeroHedge, Dec 24, 2014):

In the idyllic foothills of the Sierras amid the forested beauty of Tahoe National Forest, it appears the California drought finally got to Deirdre Orozco. As the following crazy clip shows, the 50-year-old Santa Clara woman went full Mad Max on two young female drivers after they reportedly made “a rude gesture” to Orozco after she had been tailgating. The dramatic cellphone video of the event has ended with Orozco being charged with two counts of assault with a deadly weapon, two counts of false imprisonment, unlawful use of a badge, reckless driving and resisting arrest. Happy Holidays America.

A Northern California woman made her first court appearance Tuesday after a road rage incident was captured in a dramatic cellphone video that showed a vehicle forcing a car off a mountain highway.

Two women frantically called the California Highway Patrol on Saturday afternoon to report that they were being repeatedly cut off by the driver of a Ford Explorer Sport Trac pickup truck on Interstate 80, about 60 miles northeast of Sacramento.

The video shows the Explorer forcing their Mazda onto the shoulder as the Mazda’s driver screams.

“I could not believe this was real. I was sitting there going, ‘This has to be a joke,'” Strykul told The Associated Press on Tuesday.

The suspect, Deirdre Orozco, 50, of Santa Clara, was charged with two counts of assault with a deadly weapon, two counts of false imprisonment, unlawful use of a badge, reckless driving and resisting arrest. 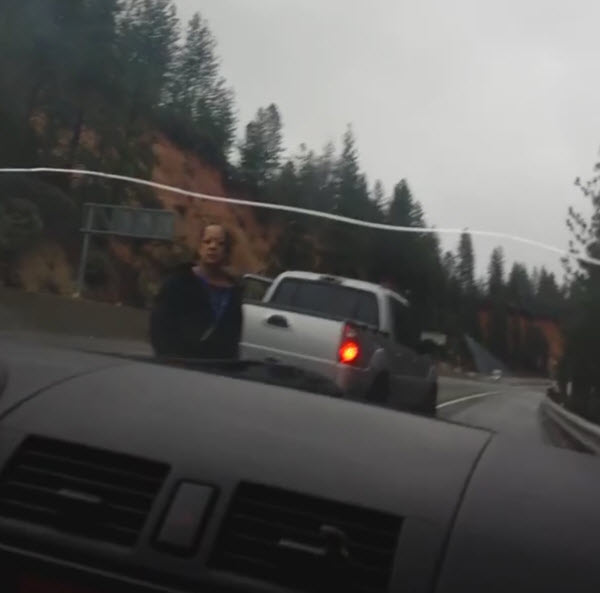 She was held in lieu of $250,000 bail and was due back in court Friday after pleading not guilty to multiple charges from two incidents days apart.