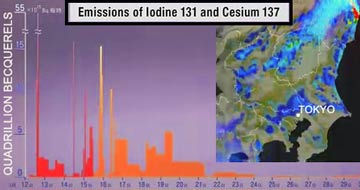 – Japan officials reveal Fukushima radiation release quadruple what they claimed — TV: “Fukushima disaster has been evaluated as the worst” — Gov’t has no explanation for what happened — Expert: “Massive leak for such a long period… We have to take precautions to prevent a recurrence” (VIDEO) (ENENews, Dec 22, 2014):

Note the government’s previous investigation focused on releases between March 11 and March 15, which they now say accounted for just 1/4 of the radioactive substances emitted. This would mean that their new estimate of the total radioactive release is 4 times the estimate d based on the initial investigation.