“In short, two-thirds of the “boost” to final Q3 personal consumption came from, drumroll, the same Obamacare which initially was supposed to boost Q1 GDP until the “polar vortex” crashed the number so badly, the BEA decided to pull it completely and leave this “growth dry powder” for another quarter. That quarter was Q3.”

Back in June, when we were looking at the final Q1 GDP print, we discovered something very surprising: after the BEA had first reported that absent for Obamacare, Q1 GDP would have been negative in its first Q1 GDP report, subsequent GDP prints imploded as a result of what is now believed to be the polar vortex. But the real surprise was that the Obamacare boost was, in the final print, revised massively lower to actually reduce GDP!

This is how the unprecedented trimming of Obamacare’s contribution to GDP looked like back then. 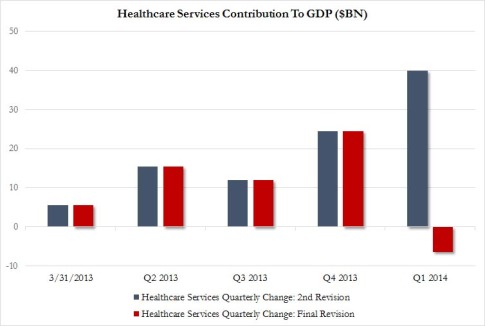 Of course, even back then we knew what this means: payback is coming, and all the BEA is looking for is the right quarter in which to insert the “GDP boost”. This is what we said verbatim:

Don’t worry thought: this is actually great news! Because the brilliant propaganda minds at the Dept of Commerce figured out something banks also realized with the stub “kitchen sink” quarter in November 2008. Namely, since Q1 is a total loss in GDP terms, let’s just remove Obamacare spending as a contributor to Q1 GDP and just shove it in Q2.

Stated otherwise, some $40 billion in PCE that was supposed to boost Q1 GDP will now be added to Q2-Q4.

And now, we all await as the US department of truth says, with a straight face, that in Q2 the US GDP “grew” by over 5% (no really: you’ll see).

Well, we were wrong: it wasn’t Q2. It was Q3, albeit precisely in the Q2-Q4 interval we expected.

Fast forward to today when as every pundit is happy to report, the final estimate of Q3 GDP indeed rose by 5% (no really, just as we predicted), with a surge in personal consumption being the main driver of US growth in the June-September quarter. As noted before, between the second revision of the Q3 GDP number and its final print, Personal Consumption increased from 2.2% to 3.2% Q/Q,  and ended up contributing 2.21% of the final 4.96% GDP amount, up from 1.51%.

So what did Americans supposedly spend so much more on compared to the previous revision released one month ago? Was it cars? Furnishings? Housing and Utilities? Recreational Goods and RVs? Or maybe nondurable goods and financial services?

Actually no. The answer, just as we predicted precisely 6 months ago is… well, just see for yourselves. 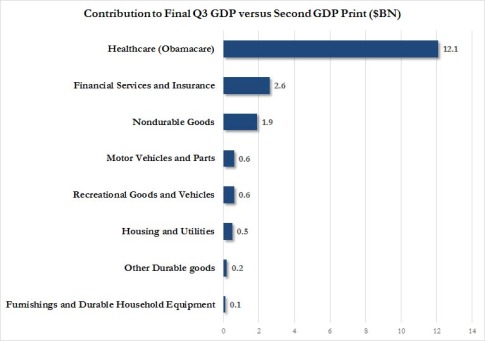 In short, two-thirds of the “boost” to final Q3 personal consumption came from, drumroll, the same Obamacare which initially was supposed to boost Q1 GDP until the “polar vortex” crashed the number so badly, the BEA decided to pull it completely and leave this “growth dry powder” for another quarter. That quarter was Q3.