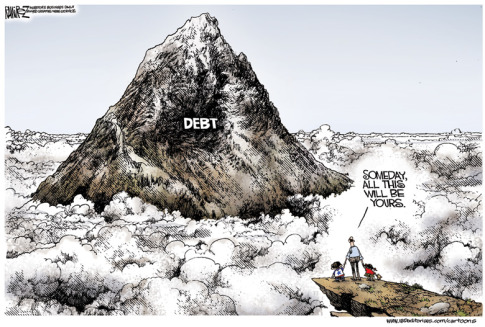 But today, we continue with our look at the macro situation at the end of 2014… One way of measuring GDP is to add together consumption, investment, government spending and net exports.

The idea is to measure total spending. And in this way, also measure production. Most things produced are sold. Add up how much spending there is and you get an idea of how much production there’s been.

This means that the private sector – the part that pays the bills – is only $12 trillion. Total debt – government, corporate and personal – in the US is now $58 trillion (misreported yesterday as $59 trillion… but what’s a trillion dollars between friends?). That’s nearly five times the real economy that supports it.

And it helps explain why it is so hard to “grow your way out” of debt. Assuming an annual interest rate of 2%, even if you could contain debt increases to 3% of GDP a year, the productive part of the economy would have to grow at 5% just to stay even. No developed economy in the world is growing that fast.

And as recently as January 2002, the 10-year Treasury note yielded over 5%. If the average interest rate were to rise to that level again – and sooner or later it will – it would take $3 trillion to service America’s debt – or one-quarter of private sector output.

That can’t happen. The wings would fall off first. There would be a bear market in stocks and a depression in the economy – wiping out trillions of dollars of unaffordable debt and unworkable investments. 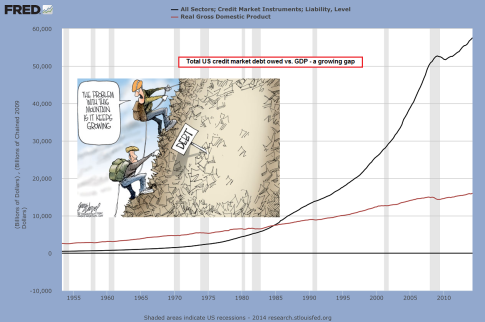 Total US credit market debt vs. GDP. Even though one is nominal and the other “real” and GDP is an extremely flawed measure of economic activity, there is an unmistakable trend toward more and more debt having to be supported by less and less economic output, via St. Louis Ferderal Reserve Research – click to enlarge.

That is how nature deals with debt bubbles. But it’s exactly what the Fed wants to avoid. How? By trying to make the economy grow faster, so that debt – as a percentage of output – is less of a burden.

But let’s see, how does this work? To grow your way out of debt you have to increase income faster than debt. Say you can sustain a healthy rate of GDP growth of 3% a year. That means that additional debt mustn’t exceed 3%.

For 2014, the US fiscal deficit – the gap between what the federal government receives in taxes and what it spends – was 2.8%. It is unlikely to go much lower. That is just the amount borrowed by the feds. The private sector is still two-thirds of the US economy. If it borrowed nothing, debt might contract, relative to the underlying economy.

But without borrowing, the economy will shrink. That is why the feds stepped up to the plate in 2009 and started swinging. The private sector had stopped borrowing. The theory behind Keynesian counter-cyclical policy is that government can offset the lack of private sector demand for credit by borrowing far more than usual.

Over the last five years, the federal government’s counter-cyclical stimulus program added $9 trillion to the nation’s debt. During that time, the private sector scarcely grew at all. Debt can only increase output if it is used to build new productive capacity. If you spend it on Medicaid and wars, it is gone forever.

The private sector ends up with a heavier burden… and a weaker back to carry it. Even when the private sector borrows, it is often merely to boost consumer spending. What’s more, the Fed’s ultra-low lending rates often lure capital into unstable and dangerous investments – such as shale oil or sub-prime auto loans.

So, much of the credit going to the private sector is also wasted. Since the 1970s, private sector growth rates have gone down. Shackled to trillions in debt… duct taped with regulations and restrictions… deceived by phony financial signals from central banks… they will probably remain low and sink lower for the foreseeable future.

Grow your way out of debt? Not likely.

The legacy – Cartoon by Ramirez

2 thoughts on “Grow Your Way Out of Debt? Don’t Make Us Laugh …”