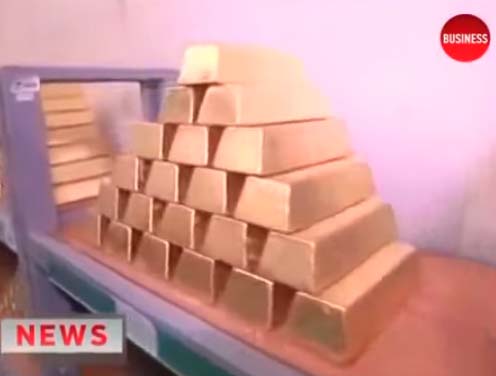 Just when one thought the story of Ukraine and its (now non-existant) gold could not get any more surreal, it did.

As a reminder, it was about a month ago when we learned courtesy of an interview on Ukraine TV with the country’s central bank head Valeriya Gontareva, that Ukraine’s gold was virtually all gone, when she made the stunning admission that “in the vaults of the central bank there is almost no gold left. There is a small amount of gold bullion left, but it’s just 1% of reserves.”

That in itself would have been sufficient to explain why just a few short days later, the Netherlands shocked the world when it announced it had secretly repatriated 122 tonnes of gold from the NY Fed, and had the story of Ukraine’s missing gold ended there (or even with the criminal probe launched by Ukraine whether the central bank head had abused her power and misused her office when she “intentionally committed an extremely unfavorable transaction for the gold and forex reserves of Ukraine”), it still would have been one of the most bizarre, surreal stories of 2014.

As Bloomberg reports, Ukraine opened a criminal probe after several gold bars at the central bank’s storage in the southern city of Odessa turned to be painted lead.

“The management of the central bank’s branch in Odessa asked us to investigate fraud by their employee,” Volodymyr Shablienko, head of the Odessa police’s press office, said by phone today. “We are conducting a forensic audit now.”

As Bloomberg explains, the latest gold fraud involved a central bank employee passing lead bars covered with golden paint to the storage unit, registering them as gold, the Vesti newspaper reported today, citing an unidentified person with knowledge of the matter in Odessa’s police department.

According to additional information from RT, the central bank was actually conned into buying the gold-plated lead.

Yes lead, not even tungsten.

RT adds that the National Bank of Ukraine (NBU) has confirmed the theft of several kilograms of gold in the Odessa region. The cashier involved has apparently fled to Crimea, Vesti Ukraine reports. Criminal proceedings began on November 18, even though the scam apparently took place between August and October.

In other words, when Ukraine still, allegedly, had some gold left. Now it has no more gold, but at least it has some very expensive lead.

A preliminary investigation suggests the gang had someone working for them inside the bank that forged the necessary paperwork to allow the sale of the fake gold bullion. It’s also been discovered that bank staff were not regularly checked when entering or exiting the premises.

Altogether some 11 kilograms of gold worth about $420,000 are missing.

And while one can laugh at the stupidity of a central bank duped into believing gold-plated lead is the real deal, the real stunner is that according to the First Deputy Central Bank Governor Oleksandr Pysaruk, the central bank “took a principal decision that we will not buy gold any more from the population. We are making conclusions internally, including changing our procedures.”

In other words, until December, the central bank would buy any gold-plated lead, or tungsten, without any authenticity tests from any member of the population, or in other words, exchanging its existing reserves, i.e., gold (which it no longer has after converting most of it into dollars), into lead.

There is a potential silver lining here in that whoever ended up getting the bulk of Ukraine’s gold reserves, is now also the proud owner of a few hundreds kilograms of gold-plated lead.

One really couldn’t make this up, which is perhaps the point. Better for the public to be focused on the stupidity of its central bankers, than on their criminality for selling out the people’s gold (or worse, giving it away for free in exchange for political favors of the current class of US State Department muppets) to unknown buyers in exchange for a few pieces of green paper.