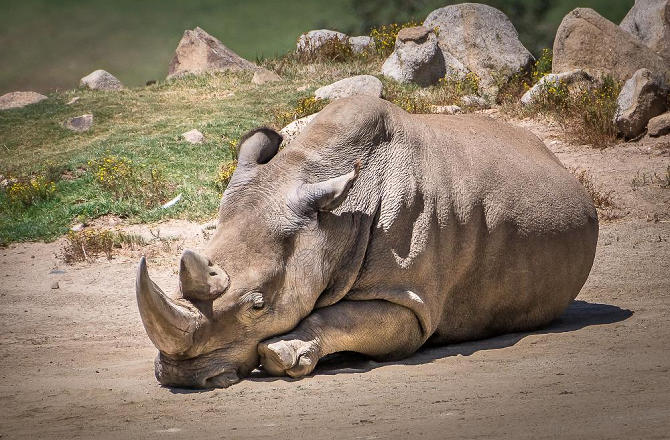 Due to extensive poaching in which the perceived value of their horns seems to matter more than their lives, the northern white rhino population has dwindled severely through the years. While many people may consider numbers in the hundreds or even thousands small, in the instance of the northern white rhino, the numbers are much more shocking; they can literally be counted on one hand.

Sadly, with the recent natural death of Angalifu, a 44-year-old rhino at San Diego’s National Safari Park, there are now only five left on the planet. While it’s good news that they’re under the protection of zoos and wildlife reserves, the bad news is that it’s unlikely that the remaining rhinos will produce offspring, as it’s very rare for rhinos to breed in captivity. In fact, the female rhino at the San Diego Park, Nola (who is still living), was unable to produce offspring with Angalifu.(1,2)

Furthermore, there is only one male of this species left. Named Sudan, he lives in the Ol Pejeta Conservancy in Kenya. Two females, Najin and Fatu, live with him. Elsewhere, there’s an elderly female rhino living in the Czech Republic at the Dvur Kralove Zoo.(3)

“Angalifu’s death is a tremendous loss to all of us,” said the safari park curator, Randy Rieches. “[N]ot only because he was well beloved here at the park but also because his death brings this wonderful species one step closer to extinction.”(3)

The need for such animals to be put in captivity is essential to help save the species. Despite no supporting scientific evidence, many in Asian cultures — where the horns are in high demand — believe that the horns harness medicinal powers and that they’re a sign of wealth. Their horns, which contain keratin, are considered very valuable on the black market, where an ounce of it can earn someone a quick $5,550, give or take. That figure is estimated to be of more worth than the price of gold or platinum.(4)

Unfortunately, though, the poaching has continued, killing them or forcing animals out of their natural habitat. Then situations such as old age takes its toll as it did for Angalifu. Couple natural deaths with the odds of producing offspring, and many feel that complete extinction of this particular rhino is only a matter of time.

That is, unless science steps in.

Can science and technology step in to help save the rhino and other animals?

Efforts have been looked into to help these northern white rhinos reproduce via in vitro fertilization. However, most people are familiar with this taking place among cows, where the process is fairly easy and relatively inexpensive. The story is vastly different with rhinos, where the process is only in the experimental stages.

“You’re dealing with a semi-wild, what, 2-ton animal?” said the CEO of Kenya’s Ol Pejeta Conservancy, Richard Vigne. “Which is very different than dealing with completely domesticated cattle.” Vigne was involved with an effort that airlifted northern white rhinos from a Czech Republic zoo to Kenya’s Ol Pejeta Conservancy with the hopes of providing the animals with a more natural habitat that was more conducive to mating. Unfortunately, while a pair was found mating in 2009, no offspring were produced.(2)

But what makes this approach more viable, perhaps, is that the southern white rhino has made a comeback; once numbering a mere 20, protection and successful breeding efforts have put their current numbers around 14,000.(2)

In the meantime, to help stave off poachers who continue to kill other animals such as black rhino and elephants, UAVs (Unmanned Aerial Vehicles) are being eyed as a beneficial wildlife-saving mechanism. The craft, or drones as they’re often called, use high-spec night and thermal imaging technologies and can be programmed to hover over wildlife areas to spot would-be poachers in a manner that isn’t disruptive to the animals. It’s just one of many ways to bring technology into the equation; radio towers that monitor animal tracking tags are also being examined as a means to save wildlife from extinction.(5)