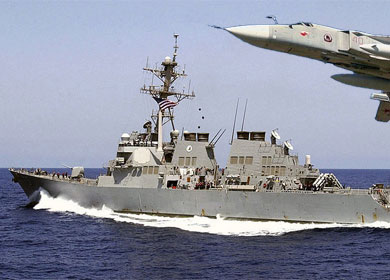 This article was first published by Voltairenet in other languages in September 2014.

The State Department acknowledged that the crew of the destroyer USS Donald Cook has been gravely demoralized ever since their vessel was flown over in the Black Sea by a Russian Sukhoi-24 (Su-24) fighter jet which carried neither bombs nor missiles but only an electronic warfare device.

This video shows the USS Donald Cook sailing into the Black Sea to position itself near Russia’s territorial waters.

On 10 April 2014, the USS Donald Cook entered the waters of the Black Sea and on 12 April a Russian Su-24 tactical bomber flew over the vessel triggering an incident that, according to several media reports, completely demoralized its crew, so much so that the Pentagon issued a protest [1].

The USS Donald Cook (DDG-75) is a 4th generation guided missile destroyer whose key weapons are Tomahawk cruise missiles with a range of up to 2,500 kilometers, and capable of carrying nuclear explosives. This ship carries 56 Tomahawk missiles in standard mode, and 96 missiles in attack mode.

The US destroyer is equipped with the most recent Aegis Combat System. It is an integrated naval weapons systems which can link together the missile defense systems of all vessels embedded within the same network, so as to ensure the detection, tracking and destruction of hundreds of targets at the same time. In addition, the USS Donald Cook is equipped with 4 large radars, whose power is comparable to that of several stations. For protection, it carries more than fifty anti-aircraft missiles of various types.

Meanwhile, the Russian Su-24 that buzzed the USS Donald Cook carried neither bombs nor missiles but only a basket mounted under the fuselage, which, according to the Russian newspaper Rossiyskaya Gazeta [2], contained a Russian electronic warfare device called Khibiny.

As the Russian jet approached the US vessel, the electronic device disabled all radars, control circuits, systems, information transmission, etc. on board the US destroyer. In other words, the all-powerful Aegis system, now hooked up – or about to be – with the defense systems installed on NATO’s most modern ships was shut down, as turning off the TV set with the remote control.

The Russian Su-24 then simulated a missile attack against the USS Donald Cook, which was left literally deaf and blind. As if carrying out a training exercise, the Russian aircraft – unarmed – repeated the same maneuver 12 times before flying away.

After that, the 4th generation destroyer immediately set sail towards a port in Romania.

Since that incident, which the Atlanticist media have carefully covered up despite the widespread reactions sparked among defense industry experts, no US ship has ever approached Russian territorial waters again.

According to some specialized media, 27 sailors from the USS Donald Cook requested to be relieved from active service.

Vladimir Balybine – director of the research center on electronic warfare and the evaluation of so-called “visibility reduction” techniques attached to the Russian Air Force Academy – made the following comment:

“The more a radio-electronic system is complex, the easier it is to disable it through the use of electronic warfare.”

A video presentation of the US Aegis system. Currently installed on the most sophisticated US Navy warships and in the process of being set up throughout the entire range of NATO naval forces, this missile defense system was completely knocked out in the Black Sea by a Russian electronic warfare device.

Visual display of the incident.

1 thought on “What Frightened The USS Donald Cook So Much In The Black Sea?”