– Outspooking The Lehman Apocalypse: Could A Russian Default Be In The Cards? (ZeroHedge, Dec 16, 2014): 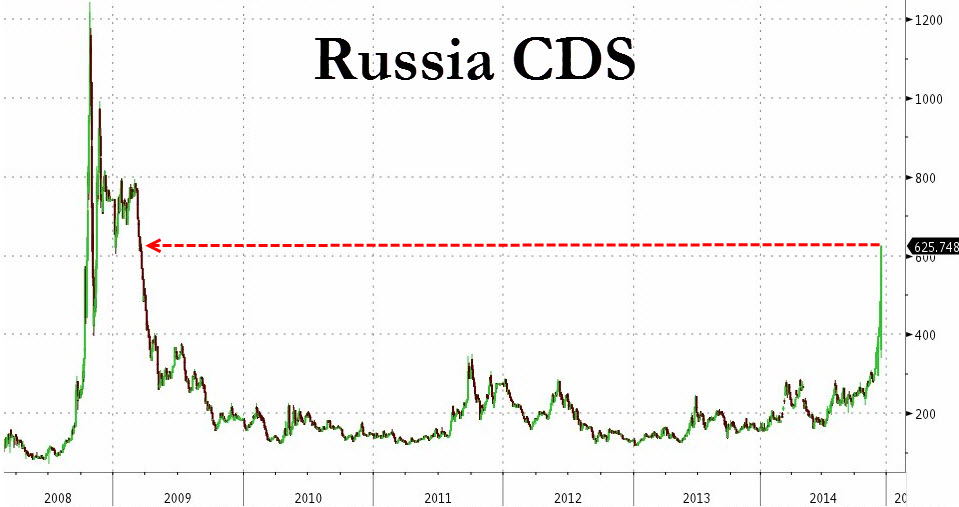 Russia’s markets have been spanked hard despite last night’s hike. 19% currency crash and 13% down stocks in a session. Ouch! Cumulatively, over the past few weeks stocks, oil and the Ruble are off 50% plus, and bonds off 40%. This morning felt like free-fall. Expect more action from the Russians to stave off economic catastrophe… imminent capital controls are rumoured, but markets are demonstrating a massive loss of confidence.

Lots of old market hands are talking about how its similar to the Russia default and crash of ‘98 all over again.. Actually.. its worse.

The scale and speed of the current collapse is a magnitude greater, and the effects are accelerated and magnified by the utter absence of liquidity, and by the political stakes at play. Lots of comments about how a Russian crisis might play out and what cornered Putin may do – or be forced into. Let’s not speculate, but it seems pretty clear that any Western support to calm the crisis and stabilise markets would come at a very high personal cost to Putin. That would be a good point to get selectively involved.

It’s too early. We’ve seen a few cautious buyers get wallpapered with Russian and Ukraine paper – and done decent amount of business, but generally none of the main distressed players feel it’s yet time to get involved. “Don’t expect a V-Shaped recovery – its different and aint going to happen..” said one manager. Hope is not a strategy when it comes to Russia at present.

The big risk is whether the Russian meltdown can be contained within the borders of the Rodina. All kinds of no-see-ems suggest themselves.

What are potential knock-ons into other markets? Perhaps Russians having to unwind London Property, (we understand Russians have been very big buyers in recent weeks prefiguring potential exchange controls), or further ructions in Europe? We’re already concerned European sovereign debt is poised on a knife-edge between brutal reality and over-inflated hopes for QE. A strong nudge from a conflagurating Russia and bang goes Italy?

Or will it come from safe-haven flight triggering sell-offs across every asset class in a replay of 2008? Could a Russia default that will outspook the Lehman apocalypse be on the cards?

So much for dull Christmas markets…

1 thought on “Outspooking The Lehman Apocalypse: Could A Russian Default Be In The Cards?”