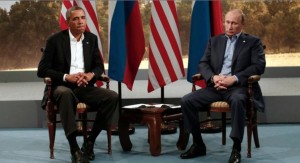 – Obama To Sign Off On Lethal US Aid To Ukraine By End Of Week, Russian Response To Follow (ZeroHedge, Dec 16, 2014):

As we reported over the weekend, in the tumult surrounding Citigroup’s annexation of Congress with the passage of the theatrically dramatic $303 trillion derivative quid-pro-$1.1 trillion spending quo, what most missed is that Congress also unanimously passed the The Ukraine Freedom Support Act of 2014, which not only expands Russian sanctions (read the details here) but far more impotantly, provides “lethal assistance to Ukraine’s military.” And as we explained, passage of this law is just the pretext some Russian legislators needed to push for a full-blown, preemptive military incursion in east-Ukraine.

“The decision of the US Senate is extremely dangerous. If it is supported by the House of Representatives and signed by their president, Russia must reply with adequate measures,” Mikhail Yemelyanov of the Fair Russia party told reporters on Friday.

“It is quite possible that we should return to the decision by our Upper House and give the Russian president an opportunity to use military force on Ukrainian territory preemptively. We should not wait until Ukraine is armed and becomes really dangerous,” the lawmaker stated.

Yemelyanov also noted that in his opinion the US Senate’s decision to arm Ukraine had revealed that Washington wasn’t interested in the de-escalation of the Ukrainian conflict. He then said that US actions gave him the impression they was seeking to turn Ukraine into some sort of an “international militant targeting the Russian Federation.”

“In a few years Ukraine will turn into a poor and hungry country with an anti-Russian government that will teach its population to hate Russia. They will be armed to the teeth and Ukraine and US reluctance to recognize the Russian Federation within its current borders would always provoke conflicts,” the MP said.

Furthermore, we asked if “this means that what was a lingering proxy cold civil war in east Ukraine between NATO-armed Ukraine troops and Russia-armed Separatists and local militias is about to escalate into a shooting precursor to something greater? There is still hope an all out escalation can be avoided” and we cited White House press secretary Joshn Earnest who last week said that “the administration hadn’t finished reviewing the language and isn’t ready to take a position on the legislation. He said the administration wants to ensure that the U.S. and its European allies are working together, that any sanctions are effective and that they minimize harm to U.S. and European companies. “This is delicate work,” Earnest said.”

Apparently, not delicate enough, and moments ago we got confirmation that the epic collapse in the USDRUB is just a jovial preview of the main event. To wit:

And with that, US “lethal aid” will shortly begin arriving in Kiev, which in turn will be just the pretext needed by Sergey Lavrov and the Kremlin to escalate the recent events in Russia as a direct attack by the West, and to demand retaliation against a US president who “does not reason” as the Russian media will appeal to the population in an attempt to “rally round the flag“, and as a result Russian tanks may have no choice but to enter the separatist territories in East Ukraine.

What the western, and certainly NATO, response at that point will be, is far beyond our meager prediction skills.

2 thoughts on “Obama To Sign Off On Lethal US Aid To Ukraine By End Of Week, Russian Response To Follow”