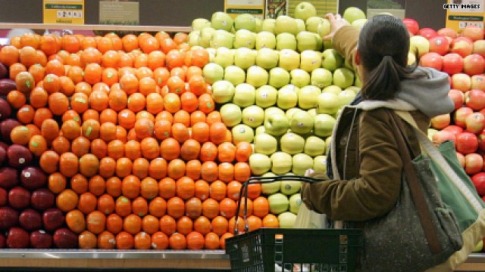 Both the Food & Drug Administration and Centers for Disease Control & Prevention say Propylene glycol is safe for food use in certain amounts, but Europe is a lot tougher on it.

In fact, America is pretty laid back on a lot of food ingredients that other nations around the world have already banned over concerns that they are carcinogens, can disrupt the nervous system or contribute to any number of dangerous health side effects.

Here are seven of those ingredients, which you’ll find listed on food labels throughout your friendly, local U.S. supermarket, but which are forbidden in many other countries.

What is it? Growth hormones that increase a cow’s dairy production.

What it’s in: Milk and other dairy products.

Where it’s banned: The European Union, Australia, Canada and Japan.

What is it? A fat substitute.

What it’s in: Fat-free potato chips.

Where it’s banned: The UK and Canada.

What is it? A growth booster for livestock.

What it’s in: Cattle, pigs, turkey.

Where it’s banned: Approximately 160 countries, including China, Russia and the European Union.

What is it? A chemical used to preserve the skin coloring of apples.

What it’s in: Apples.

Where it’s banned: The European Union.

What is it? An additive that accelerates flour bleaching and makes it rise faster.

Where it’s banned: Australia and Europe.

What is it? Additive that keeps flavor from separating in sports drinks and sodas.

What it’s in: Citrus-flavored sports drinks and sodas. Also, flame retardants. Coca-Cola and Pepsi stopped using it this year.

Where it’s banned: Europe and Japan.

What is it? Preservatives used to keep fats from turning rancid and maintain food color and odor.

Where it’s banned: Japan, England and several other European countries. California lists it as a possible carcinogen.