In space, no one can hear you scream… unless you happen to be Venezuela’s (soon to be former) leader Nicolas Maduro, who has been doing a lot of screaming this morning following news that UAE’s Energy Minister Suhail Al-Mazrouei said OPEC will stand by its decision not to cut crude output “even if oil prices fall as low as $40 a barrel” and will wait at least three months before considering an emergency meeting.

In doing so, OPEC not only confirms that the once mighty cartel is essentially non-existant and has been replaced by the veto vote of the lowest-cost exporters (again, sorry Maduro), but that all those energy hedge funds (and not only) who hoped that by allowing margin calls to go straight to voicemail on Friday afternoon, their troubles would go away because of some magical intervention by OPEC over the weekend, are about to have a very unpleasant Monday, now that the next oil price bogey has been set: $40 per barrell.

Luckily, this will be so “unambiguously good” for the US consumer, it should surely offset the epic capex destruction that is about to be unleashed on America’s shale patch, in junk bond hedge funds around the globe, and as millions of high-paying jobs created as a result of the shale miracle are pink slipped.

According to Bloomberg, OPEC won’t immediately change its Nov. 27 decision to keep the group’s collective output target unchanged at 30 million barrels a day, Suhail Al-Mazrouei said. Venezuela supports an OPEC meeting given the price slide, though the country hasn’t officially requested one, an official at Venezuela’s foreign ministry said Dec. 12. The group is due to meet again on June 5.

“We are not going to change our minds because the prices went to $60 or to $40,” Mazrouei told Bloomberg at a conference in Dubai. “We’re not targeting a price; the market will stabilize itself.” He said current conditions don’t justify an extraordinary OPEC meeting. “We need to wait for at least a quarter” to consider an urgent session, he said.

And with OPEC’s 12 members pumped 30.56 million barrels a day in November, exceeding their collective target for a sixth straight month, according to data compiled by Bloomberg. Saudi Arabia, Iraq and Kuwait this month deepened discounts on shipments to Asia, feeding speculation that they’re fighting for market share amid a glut fed by surging U.S. shale production.

The above only focuses on the (unchanged) supply side of the equation – and since the entire world is rolling over into yet another round of global recession, following not only a Chinese slowdown to a record low growth rate, but also a recession in both Japan and Europe, the just as important issue is where demand will be in the coming year. The answer: much lower.

OPEC’s unchanged production level, a lower demand growth forecast from the International Energy Agency further put the skids under oil on Friday, raising concerns of possible broader negative effects such as debt defaults by companies and countries heavily exposed to crude prices. There was also talk of the price trend adding to deflation pressures in Europe, increasing bets that the European Central Bank will be forced to resort to further stimulus early next year.

And while the bankruptcy advisors and “fondos buitre” as they are known in Buenos Aires, are circling Venezuela whose default is essentially just a matter of day, OPEC is – just in case its plan to crush higher cost production fails – doing a little of the “good cop” routing as a Plan B.

According to Reuters, OPEC secretary general tried to moderate the infighting within the oil exporters, saying “OPEC can ride out a slump in oil prices and keep output unchanged, arguing market weakness did not reflect supply and demand fundamentals and could have been driven by speculators.”

Ah yes, it had been a while since we heard the good old “evil speculators” excuse. Usually it appeared when crude prices soared. Now, it has re-emerged to explain the historic plunge of crude.

Speaking at a conference in Dubai, Abdullah al-Badri defended November’s decision by the Organization of the Petroleum Exporting Countries to not cut its output target of 30 million barrels per day (bdp) in the face of a drop in crude prices to multi-year lows.

“We agreed that it is important to continue with production (at current levels) for the … coming period. This decision was made by consensus by all ministers,” he said. “The decision has been made. Things will be left as is.”

Some say selling may continue as few participants are yet willing to call a bottom for markets.

There is some hope for the falling knife catchers: “Badri suggested the crude price fall had been overdone. “The fundamentals should not lead to this dramatic reduction (in price),” he said in Arabic through an English interpreter. He said only a small increase in supply had lead to a sharp drop in prices, adding: “I believe that speculation has entered strongly in deciding these prices.””

Unfortunately for the crude longs, Badri is lying, as can be gleaned from the following statement:

Badri said OPEC sought a price level that was suitable and satisfactory both for consumers and producers, but did not specify a figure. The OPEC chief also said November’s decision was not aimed at any other oil producer, rebutting suggestions it was intended to either undermine the economics of U.S. shale oil production or weaken rival powers closer to home.

And as Europe has shown repeatedly, not only is it serious when you have to lie, but it is even worse when you can’t remember what lies you have said in the past. That alone assures that the chaos within OPEC – if only for purely optical reasons – will only get worse and likely lead to least a few sovereign defaults as the petroleum exporting organization mutates to meet the far lower demand levels of the new normal.

In the meantime, the only question is how much longer can stocks ignore the bloodbath in energy (where there has been much interstellar screaming too) because as we showed on Friday, despite the worst week for stocks in 3 years, equities have a long way to go if and when they finally catch up, or rather down, with the crude reality… 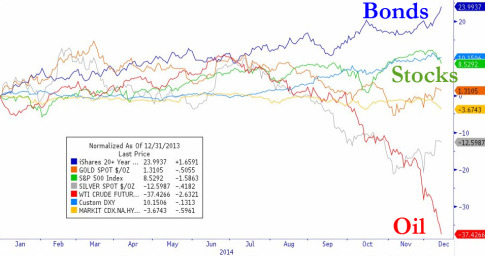