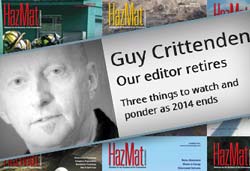 – Magazine Editor’s Final Words: Fukushima “exponentially more dire than Chernobyl” — Deteriorating plant threatens “mass extinction around world” — “It’s made a deep impression on me recently” — “You have an obligation to be aware of conditions there” (AUDIO) (ENENews, Dec 12, 2014):

Kevin Kamps, nuclear waste watchdog for Beyond Nuclear, Nuclear Hotseat, Dec 9, 2014 (at 37:00 in):  “If the meltdown is bad enough, that’s going to burn its way right through the foundations of the containment — like we’ve seen at Fukushima Daiichi.”