– How Wal-Mart Fabricated And Lied About Its “Strong” Chinese Sales For Years (ZeroHedge, Dec 11, 2014):

For many, if not most, companies and especially retailers, the great wildcard that is the “massive” Chinese market with the potential of hundreds of millions of buyers in the country’s nascent middle class, has been a slam dunk when it comes to boosting stock prices. After all, what can go wrong? America’s largest retailer was one of those hoping to capitalize on just this shareholder euphoria for Chinese exposure, and just like everyone else, it milked its Chinese exposure for many years. And then, unexpected everything did go wrong: as Bloomberg explains, “After years of heralding China as one of its best markets, Wal-Mart in August said its performance there was among the worst in its major countries.”

How is that possible?

Well, as Bloomberg further explains, China’s reputation of fabricating every single number is there for a reason. And what’s worse, it isn’t just China, but it also includes US corporations operating in China. Such as Walmart, which succeeded in pulling the wool over its shareholders’ eyes for years thanks to “questionable accounting and unauthorized sales practices, according to employees and internal documents reviewed by Bloomberg.”

Among these: bulk sales to other retailers and some sales allegedly booked when no merchandise left the shelves. These illegal practices, and much more “made business appear strong even as retail transactions slowed and unsold inventory piled up, these people and documents say.“ 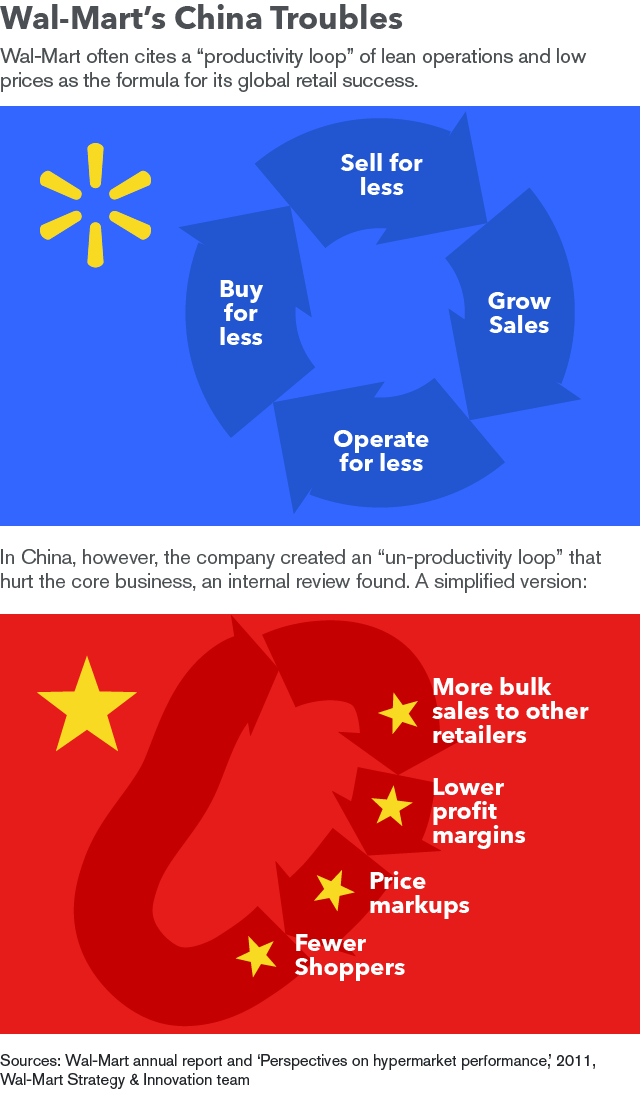 And nobody cared, because WMT (and every other) stock went up, clearly not on fundamentals but on the back of the biggest equity bubble blown by central banks in history. And it wasn’t until the relentless price appreciation finally slowed down that someone started asking questions, however with accountants and regulators both in China and the US corrupt and complicit to the underlying fraud, it goes without saying that nobody did or ever will go to prison.

So what are some of these fraudulent practices that WMT engaged in? We ask simply because we know that this massive canary in the coalmine will give us insights into what all other retailers in China are doing, up to an including famous recent Chinese IPOs. Here are the details:

And, of course, the oldest trick in the book: the most epic channel stuffing imaginary money can buy:

A back room at one South China store shown to Bloomberg News in September held boxes of goods piled to the ceilings, covering light switches and leaving only a foot-wide aisle for employees to move around in. A Wal-Mart store in Shenzhen provided an address for a warehouse one employee said was opened to handle added inventory five years ago. At the address, a security guard said Wal-Mart had two warehouses there.

When the findings of his Feb. 14, 2011, report were presented to his boss, Shawn Gray, then vice president of operations in China, Gray said the “best option was to keep things quiet,” according to Lin. After a discussion of the issues with Roland Lawrence, then chief financial officer of Wal-Mart China, Lin said he saw no action.

End result, when Walmart first conducted an internal audit in 2011 it said the following: “None of the financial issues we’ve reviewed in China were determined to be material to Wal-Mart’s consolidated financial condition or results of operations,” the statement said. Wal-Mart didn’t address specific questions on accounting issues, and leadership changes. It said bulk sales to retailers are common practice in developing markets, monitored regularly, and a modest part of its Chinese business.”

Wal-Mart named Lin as a vice president of financial services in April 2012. He left in May 2013 for his job with Visa. Lin said he traveled to Bentonville at one point after the report and bumped into Price and McMillon, who, through a Wal-Mart spokeswoman, declined to comment on Lin’s account. “Doug took me aside, shook my hand and said, ’thank you very much for what you did over there,’” Lin said of the encounter. “That was it. No further follow-ups. Nothing more was discussed. It was like it all never happened.”

In short, WMT lied and kept lying for years. Why?

“There is a general flexibility on ethics” in China, Lin said in an interview. “There was a huge desire to perform. In this market, they believe if they’re hitting the numbers, then they’re doing the right thing.”

How quaint: breaking the law and lying to shareholders in hope of “doing the right thing.”

The U.S. Department of Justice and the Securities and Exchange Commission have been investigating Wal-Mart for possible violations of the Foreign Corrupt Practices Act, the company has disclosed. Internal investigations of possible misconduct are open in four countries, including China, the company has said.

Nothing will happen: all it will take is a few multi-million wire transfers in donations, pardon, lobby spending to make sure the DOJ finds absolutely nothing.

The good news is that WMT is the only one who engaged in all these criminal practices. One company which certainly has not resorted to fraud, at least according to its exuberant underwriters (all of whom certainly performed underwriter due diligence, right) and its share price, is Alibaba. So as boring old WMT engaged in boundless fraud in China, we urge investors to buy Chinese “new normal” retailers built on hype surrounding the second dot com bubble, and operating in the most “ethically-challenged” country in the world.

Because, as above, what can possibly go wrong?