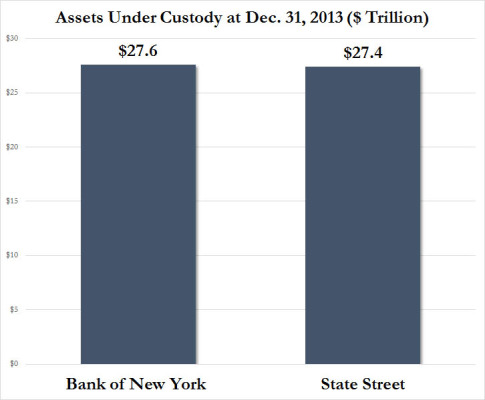 – 55 Trillion Reasons Why Bank Of New York And State Street Better Not Get Any Ideas From China (ZeroHedge, Dec 9, 2014):

While everyone knows the direct consequence of China’s tinkering with collateral rules last night led to the biggest Chinese stock market crash in years, not many understand what caused this. In a nutshell, what China did was severely curb its shadow banking industry, when China’s securities clearing house said it raised the quality threshold for corporate bonds qualifying as collateral for repurchase agreements, or repos, which are short-term loans with maturities spanning from overnight to 182 days. And since the  proceeds of such repo deals are usually used to purchase stocks, suddenly a major source of “dry powder” for Chinese stock buying was violently and unexpectedly yanked away.

As those who are familiar with the US shadow banking industry are aware, this is precisely the very much unregulated lending pathway that froze up in the aftermath of the Lehman collapse, and which the Fed has been warning for years, is the most likely locus of the next financial crisis. Putting China’s action into numbers, Shenyin Wanguo Securities analyst Kang Chen calculated this collateral adjustment would disqualify some 1.25 trillion yuan (or $202 billion) in corporate bonds as repo collateral, or 60% of all outstanding corporate bonds listed on China’s two stock exchanges.

This may sound huge but it actually is quite tiny, especially if one looks at it in the context of the market cap loss on the Shanghai Composite overnight. What is far more curious is that China would proactively pursue the same kind of action that the US and all western banks are terrified of: clogging up a key shadow banking conduit in the form of well-functioning repos.

So what would a comparable action look like in the US? For the answer we go to the two biggest players in the US repo market, those legacy asset custodians who perform asset transformation by matching assets held by Client X with assets demanded by Client Y on a rented, or repo, or better yet, rehypothecated basis: State Street and Bank of New York.

Just how big is the total asset pool of repoable securities as represented by America’s two custodian banks? The answer: shown on the chart below.

One thing to note: when pundits discuss China’s shadow banking system, unlike in western nations where this relates more fo the method and tenor of funding (as well as including the traditional risk, maturity and credit transformations), such as “unsecured overnight” in China shadow banking usually refers to the source of funds, not so much whether repo or other shadow conduits are employed. But both go directly to the most important aspect of the modern hyper-financialized economy: leverage.

In any event, if China managed to lead to the biggest crash of its market since 2009 when it halted a tiny leverage pathway which amounted to just $200 billion, imagine what would happen if – for whatever reason – BoNY and/or State Street decided to cut off some of their $55 trillion in custody assets, which in a time of ZIRP, effectively doulble as virtually free “dry powder” for anyone who wants to use them.

In short: let’s hope that America’s two venerable custody banks don’t get any ideas from China and certainly don’t decide, any time in the near future, to slam the shadow banking system shut – a system whose “assets” at just these two banks are about 3 times greater than the market cap of the S&P500.