Back in September, when we looked at the total amount of stock buybacks by S&P 500 companies, we observed that the “Buyback Party Is Over: Stock Repurchases Tumble In The Second Quarter” – according to CapIQ data, after soaring to a record $160 billion in Q1, the amount of repurchased stock dropped 20% to “only” $110 billion, which perhaps also explains why the market went absolutely nowhere in the spring and early summer. Our conclusion was that, if indeed this was the end of the buyback party, then “the Fed will have no choice but to step in again, and the central-planning game can restart again from square 1, until finally the Fed’s already tenuous credibility is lost, the abuse of the USD’s reserve status will no longer be a possibility, and the final repricing of assets to their true levels can begin.”

As it turns out our conclusion that it’s all over was premature (with the Fed getting some breathing room thanks to desperate corner offices eager to pump up their CEO’s equity-linked compensation), and as the just concluded Q3 earnings seasons confirms, what went down, promptly soared right back up, with stock repurchases in Q3 surging by 30% following the 30% drop in Q2, and nearly offsetting all the lost “corporate wealth creation” in the second quarter, with the total amount of stock repurchases by S&P 500 companies jumping from $112 billion to $145 billion, just shy of the Q1 record, and the second highest single quarter repurhcase tally going back to 2007, and before. 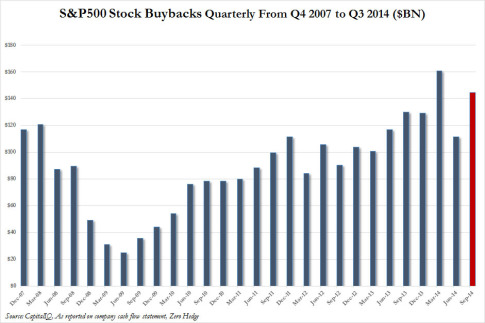 So who are the most glaring offenders of engaging in what James Montier calls the “World’s Dumbest Idea“, i.e., maximizing shareholder value almost entirely through buybacks?

Here are the 20 S&P corporations who repurchased the most stock in Q3: 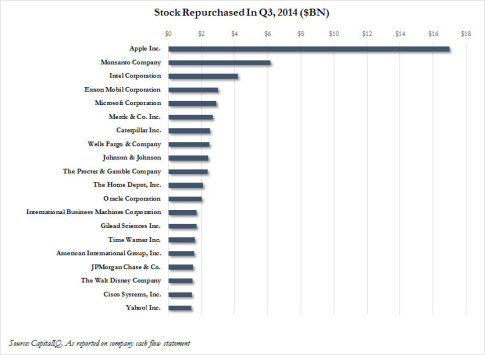 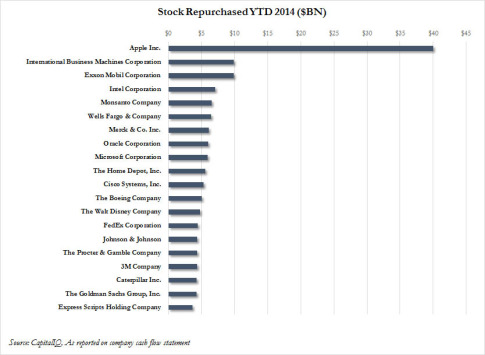 Incidentally these are also some of the best big name “performers” this year. When the wind turns and the selling begins, we urge everyone to short these names first.

1 thought on “With Q3 Buybacks Surging, These Are The Top 20 Repurchasers Of Their Own Stock”