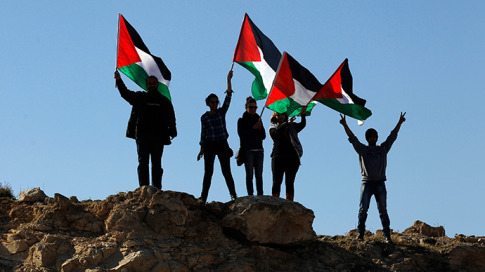 Three of Israel’s greatest living authors have added their names to an 878-signature petition calling on European parliaments to recognize the state of Palestine.

Amos Oz, David Grossman and Abraham Yehoshua all signed their names to the petition, which was sent to the European and Belgian parliaments on Sunday. Both bodies are expected to vote on resolutions to recognize Palestine later this month.

A copy of the petition was also sent to Ireland’s Dail, the country’s main parliamentary chamber, in the runup to a vote scheduled to take place Wednesday. Ireland’s upper house, the senate, already approved the non-binding motion in October, calling on its government to recognize a Palestinian state.

The Danish Parliament, which is slated to begin talks on the recognition of a Palestinian state this week, also received the letter.

“We citizens of Israel, who wish it to be a safe and thriving country, are worried by the continued political stalemate and by the occupation and settlements activities which lead to further confrontations with the Palestinians and torpedo the chances for a compromise,” the petition says.

Recognition of the state of Palestine will advance the cause of peace in the region and “encourage Israelis and Palestinians to bring an end to their conflict,” the petition states.

While Sweden was the first Western European country to recognize Palestine as a state, Bulgaria, Cyprus, Malta, Romania, Poland and the Czech Republic had already done so.

The parliaments of the UK, Spain and France have already voted for Palestinian statehood recognition, though those motions were non-binding.

Raz, the former Knesset member, told RT that a two-state solution supported by the international community was “essential for the future of Israel, the future of Palestine, and the future of the people that live here.”

He said his decision to sign the document was spurred by the most recent breakdown of peace negotiations between the two sides, prompting a different course of action.

“I think since the negotiations, the fake negotiations, between the Israeli government and the Palestinians collapsed, people all over the world, and especially in Europe, felt that they have to do something about that,” Raz said. “The same here with the peace camp in Israel…There are no negotiations, no progress, and then we have to look for alternative ways to advance the agreement.”

Tensions in the region have skyrocketed this year with Israel’s Operation Protective Edge, a 50-day military incursion into the Gaza Strip by the Israel Defense Force this summer that left more than 2,200 dead, mostly civilians. Since then, the violence has continued with a series of high-profile stabbings and murders and a standoff between the two sides over disputed holy sites in Jerusalem.

The Al-Aqsa mosque – a revered Muslim holy site in Jerusalem – has served as a flashpoint for the latest tensions. The holy site was recently closed twice by Israeli authorities due to sporadic clashes.

And last month, five people were killed and seven wounded when two assailants attacked worshipers with knives, axes and a pistol in a synagogue in North Jerusalem.