Some two weeks ago (when Venezuela CDS was trading at only 2300  bps) we previewed what – with almost absolute certainty – would be the first “casualty of the crude carnage” – Nicholas Maduro’s little socialist paradise that couldn’t: Venezuela. As a reminder, back then we learned that the OPEC member was in such dire straits it had burned through a third of a Chinese’ bailout loan in the matter of days.

Since then it only got worse, and as we reported early last week in How Goldman Sachs Became Broke Venezuela’s Loan Shark, Venezuela is now scrambling to obtain any cash even if it means doing deals with the devil, or, alternatively, god’s busy worker on this planet, Goldman Sachs.

Then, in a bout of desperation, late the same week, the country – desperate to give the impression that it is not terminally insolvent and still has some foreign reserves left – ordered its Central Bank to dramatically change the rules, in a step “that enables them to count a whole new set of ‘assets’ as potential international reserves including “stones” and “precious metals held in their vaults on behalf of foreign financial institutions.”

Some free advice to Maduro: if there is anything that screams panic, it is when countries begin changing the rules in the last minute and, just as bad, the definition of terms, be it Europe which recently added the “contribution” from hookers and blow to GDP, or Venezuela, which overnight made its reserve calculation meaningless.

What happens next is bad, if you are Venezuela that is (it will be quite lucrative for many bankruptcy bankers and lawyers). BofA’s Francisco Rodrgiuez did some math on the topic, finding that “OPEC’s decision to maintain output at current levels is bound to usher in price instability in energy markets. Until now, one of the reasons Venezuelan authorities chose to maintain high levels of relative price distortions was because they could. If oil prices remain at or below current levels for a sustained period, Venezuelan external accounts will be put under severe stress, requiring authorities to choose between further import cuts and more orthodox economic adjustments. If oil prices remain near current levels, Venezuela would need at least $25bn in new external financing to maintain current import levels. If Brent recovers to $77, as our commodities team expects, Venezuela would still have to come up with $16bn.”

The punchline: “We are thus skeptical that the economic team’s plan to tap international lenders, including China, over coming weeks will yield any tangible results.”

What this means in simple terms is that Venezuela is now desperate for any cash. As CNBC’s Silvana Ordonez reports, citing Diego Moya-Ocampos, a senior political risk analyst at IHS, “Clearly the government is trying to send signs to the market that they are working on necessary adjustments that the economy needs in order to honor international commitments and keep up with social policies, which are essential for political stability. However, these policy adjustments are not enough. This reflects simply that the government is desperately looking for funds to compensate for the lost revenues from declining oil prices.”

Worse, if as we speculated in November, China decides it no longer needs to be locked into a contractual arrangement with OPEC’s weakest link and instead lets the country implode, it may realize it can obtain better terms when dealing with Maduro as a Debtor in Possession: a supersenior status that would likely guarantee it half-priced oil or better.

In any event, we are sticking to our forecast that when the OPEC dominoes start falling, Venezuela will be the first one to go, as confirmed by Oswaldo Ramirez, director at ORC Consultores, a political consulting firm in Venezuela who said that the country’s strategy is simply “not sustainable in the long term, unless you change the state, fiscal and economy policy.”

None of those will change. Which is probably why earlier today Venezuela CDS soared again by several hundred points wider touching 3100 bps (800 wider since our first post) and is now in record wide territory – suggesting the same probability default risk as when just after the Lehman collapse, crude traded briefly as low as $30 – as the bankruptcy vultures start circling over what will most certainly be the next sovereign bankruptcy carcass. 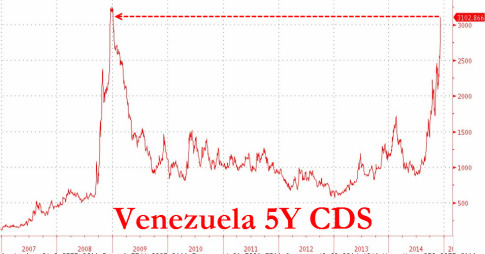