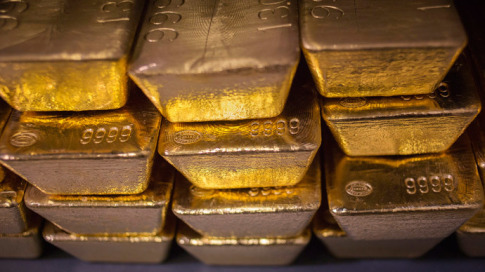 Just after I reported on the repatriation of 122.5 tonnes of gold by The Netherlands from the Federal Reserve Bank of New York (FRBNY) and about the Eurosystem allocating as much of its gold reserves as possible – a global run on gold which can only be seen in advance of a reform of the international monetary system, the next Eurosystem member has come forward, Belgium.

In Europe so far; Germany has been repatriating gold since 2012 from the US and France, The Netherlands has repatriated 122.5 tonnes a few weeks ago from the US, soon after Marine Le Pen, leader of the Front National party of France, penned an open letter to Christian Noyer, governor of the Bank of France, requesting that the country’s gold holdings be repatriated back to France, and now Belgium is making a move. Who’s next? And why are all these countries seemingly so nervous to get their gold ASAP on own soil?

VTM-nieuws has just reported the Belgium central bank has confirmed it’s investigating to repatriate all its gold reserves.

Our country is investigating to repatriate all gold reserves. The Belgium central bank has confirmed this to VTM-nieuws.

Presenter: …stored abroad, in specialized strongly secured banks. The lion share is stored in London at the Bank Of England, however, the Belgium central bank is now investigating how that gold can be repatriated.

Presenter: The Netherlands repatriated in utmost secrecy a part of their gold reserves a few weeks ago, Germany did the same to take away the uncertainty about the gold. At the end of the nineties Belgium sold 1,000 tonnes of gold the pay of debt. Now our country owns 227 tonnes. To ship this back home is not a simple task.

Luc Coene: The practical problem is the transport of the gold, with all the risk that come with it. Second, if we repatriate we need to setup a large security system in Belgium. Though currently this is done by certain central banks that are specialized in this.

Presenter: In the end, if the gold will be repatriated is a decision that has to be taken by the government.

“If one feels that in surrounding countries these decisions are taken, one knows that this question will be asked to us as well.” This statement by Coene tells me the repatriation virus is spreading in Northern Europe, it’s not a matter of IF Belgium will repatriate, but WHEN. Remember, in 2012 the Governor of the Dutch central bank said he wasn’t planning to repatriate the Dutch gold and that all gold was safe in New York, though shortly after this statement he started the repatriation process (as demonstrated in this post). The fact Coene clearly states he’s investigating the repatriation process will very likely ensue in shipping home the Belgian gold.

The presenter of the news item says Belgium sold 1,000 tonnes of gold in the nineties to payoff debt, however, it can be Belgium sold gold for the same reason The Netherlands sold 1,100 tonnes. Which is, according to Jan Kees de Jager (former Minister of Finance of The Netherlands):

Belgium holds a large share of its reserves in the UK, a smaller part in Canada and at the BIS in Basel. Of the total 227 tonnes Belgium gold reserves, 210 tonnes are allocated and 17 tonnes are unallocated. The NBB presumably has a little less than 24 tonnes leased. From the NBB website:

At the end of May 2013 there are still gold loans outstanding with five commercial banks totalling 24.97 tonnes of gold. Taking account of the due dates, that position is expected to decline further during the 2013 financial year.

NBB just send me the official statement of Luc Coene in the VTM-nieuws item (in Dutch). Click to view. 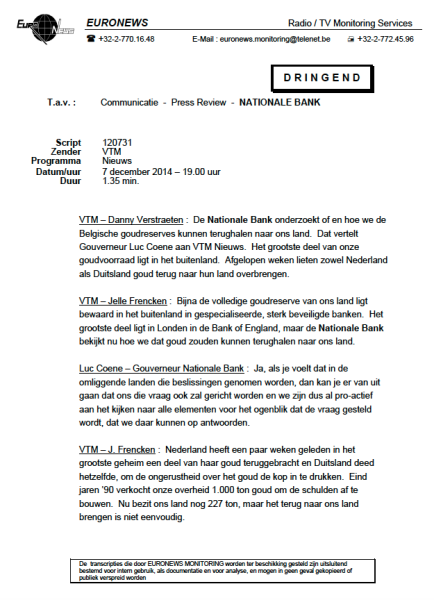 This is all I could find for now. This post will be updated when more news comes in.