– Putin: ‘Will We Help Syria? We Will’ – ‘I Do Not Want To Think That Any Other Country Will Be Subjected To Any External Aggression’ 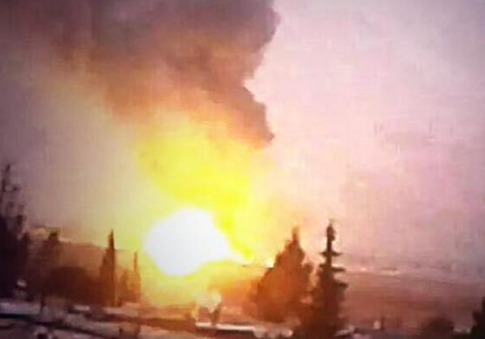 The last time Israel ignored Syrian sovereignty and attacked Bashar al Assad’s nation without fear of reprisals was in the spring of 2013, when the US was eager to launch an all out war, and tear apart the last country that stood in the path of the Qatari natural gas pipeline to Europe (and was thus desperate for a provocative pretext). As a result of last minute Russian intervention, the war was avoided following the now traditional John Kerry snafu, but not before Syria had declared Israel’s attack An “Act Of War.’ Moments ago, following a year and a half hiatus, Israel, which had not made many headlines on the geopolitical arena in recent months, launched another bomb raid on Syria, and as AP reports, Israeli warplanes carried out two airstrikes Sunday near Damascus, one near the city’s international airport and a second outside a town close to the Lebanese border, Syria’s state news agency said.

According to Syria’s SANA press agency, the attack was “an aggression against Syria” and said there were no reports of casualties. The Israeli military said it does not comment on “foreign reports.”

Syria’s state news agency did not provide any details on what was hit near the Damascus airport or in the town of Dimas, which is located along the main highway from the Syrian capital to the Lebanese frontier crossing.

Israel has carried out several airstrikes in Syria since the revolt against President Bashar Assad began in March 2011. Most of the strikes have targeted sophisticated weapons systems, including Russian-made anti-aircraft missiles, believed to be destined for Lebanon’s militant Hezbollah group. Israel has never confirmed the airstrikes.

The reason for the unexpected attack, and provocation, are unclear: while Israel has tried to stay out of the war in neighboring Syria, Prime Minister Benjamin Netanyahu has repeatedly threatened to take military action to prevent Syria from transferring sophisticated weapons to its ally Hezbollah. According to Israel Breaking News, it is possible that the IDF were targeting an arsenal of S-3000 rockets, although with Israel unwilling to confirm it launched the attack in the first place, it would be difficult to get confirmation.

The Syrian Army General Command is expected to release a statement soon regarding the Israeli airstrikes.