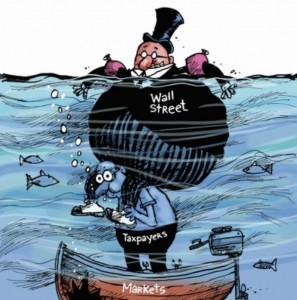 Wall Street has for some time attempted to put taxpayers on the hook for its derivatives trades. I highlighted this a year ago in the post: Citigroup Written Legislation Moves Through the House of Representatives. Here’s an excerpt: 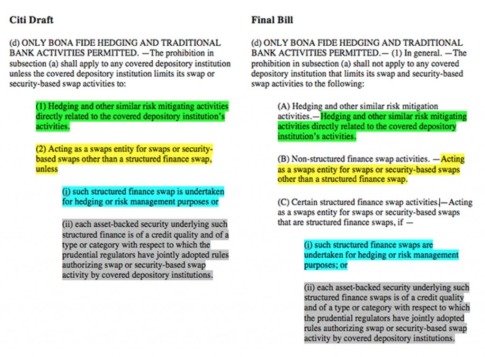 Unsurprisingly, the main backer of the bill is notorious Wall Street lackey Jim Himes (D-Conn.), a former Goldman Sachs employee who has discovered lobbyist payoffs can be just as lucrative as a career in financial services. The last time Mr. Himes made an appearance on these pages was in March 2013 in my piece: Congress Moves to DEREGULATE Wall Street.

Fortunately, that bill never made it to a vote on the Senate floor, but now Wall Street is trying to sneak it into a bill needed to keep the government running.

WASHINGTON — Wall Street lobbyists are trying to secure taxpayer backing for many derivatives trades as part of budget talks to avert a government shutdown.

According to multiple Democratic sources, banks are pushing hard to include the controversial provision in funding legislation that would keep the government operating after Dec. 11. Top negotiators in the House are taking the derivatives provision seriously, and may include it in the final bill, the sources said.

The bank perks are not a traditional budget item. They would allow financial institutions to trade certain financial derivatives from subsidiaries that are insured by the Federal Deposit Insurance Corp. — potentially putting taxpayers on the hook for losses caused by the risky contracts. Big Wall Street banks had typically traded derivatives from these FDIC-backed units, but the 2010 Dodd-Frank financial reform law required them to move many of the transactions to other subsidiaries that are not insured by taxpayers.

Last year, Rep. Jim Himes (D-Conn.) introduced the same provision under debate in the current budget talks. The legislative text was written by a Citigroup lobbyist, according to The New York Times. The bill passed the House by a vote of 292 to 122 in October 2013, 122 Democrats opposed, and 70 in favor. All but three House Republicans supported the bill.

It wasn’t clear whether the derivatives perk will survive negotiations in the House, or if the Senate will include it in its version of the bill. With Democrats voting nearly 2-to-1 against the bill in the House, Senate Majority Leader Harry Reid (D-Nev.) never brought the bill up for a vote in the Senate.