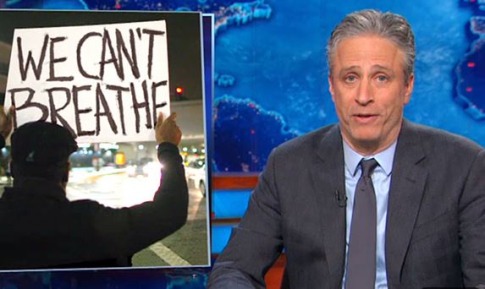 EPIC FAIL: Stewart thought he was playing it safe, but ended up getting it wrong.

Comedian Jon Stewart, host of The Daily Show, has made a living obsessing about why everyone else in media isn’t reporting “the truth”.

It turns out that Stewart has a lot to learn about reporting the truth.

In their bid to come up with new material each day, Stewart writers and producers will, more often than not, gravitate towards what they believe are the easiest targets to poke fun at, and will always take extra care to test the wind and make sure they are within the majority public opinion within their audience demographic on each single issue they turn into a skit. So it’s no surprise they would run with mainstream mythology regarding Ferguson and NYC – namely, that both incidents were racially motivated and then proceeded to flash up on screen the faces and names of ‘noteworthy’ black victims of police shootings in America.

Stewart believes that he’s safely above any critical judgement of the obvious politics he and his team inject into their ‘comedy sketches’. He hides behind the cloak of comedy because he doesn’t want to commit to doing hard news and having to deal with all the reality and course politics which come with that. He’s a ladder day court jester to the establishment, nothing more, nothing less.

For the show’s producers, their Ferguson ‘race angle’ seemed like a safe, shallow angle to take, but according to all available evidence and testimonies about those incidents – there was no racial discrimination involved either case. But that’s not the worse gaffe in this skit…

In an effort to pad-out their politicized news segment, Stewart and his production team tried to propagate an outright lie regarding, the death of suspect Dante Parker back in August. In an attempt to appear clever, Stewart lumped in Parker with his other cherry picked victims, saying, “This is an ‘isolated’ incident, like the police shooting of Tamir Rice in Cleveland, or Dante Parker in San Bernardino County, or Kendrec McDade in Pasadena, or Armand Bennett in New Orleans”.

Sadly for the imaginary news anchor Stewart, Parker was not ‘gunned down’, he was tasered by San Bernardino County sheriff’s deputies before dying August 12, after a confrontation during a home invasion/robbery investigation in Victorville, CA. It turns out that Parker was also on the drug PCP, which only added to his already existing hypertensive cardiovascular disease, which was ruled as the major contributor to his cause of death.

“[Stewart] was so wrong about those facts. They did not shoot him. They Tasered him, after he had committed a burglary and he was attempting to assault a deputy sherif–a sheriff who was losing that struggle and fighting for her life. We later found that he was under the influence of many types of drugs, which was the cause of his death. So I really believe we need to get our facts straight before making statements like that,” said DA Ramos.

Writer Michael C. Moynihan took on Stewart’s high-wire act years ago, and had this to say:

“What is Stewart’s journalistic philosophy? (…) [Stewart] has a lot to say about how the media should work. For all of his ducking and weaving, and his disingenuous claims that he’s but a comic pretending to be a newsman, Stewart aggressively engages those with whom he disagrees, and frequently makes grandiloquent pronouncements about the intellectual atrophy that has befallen America’s political and media classes. Stewart, the comedy media critic, says he shouldn’t be taken seriously—until it’s time to get serious.”

Jon Stewart tried to get serious last night, and it turned into an epic fail. Like so many other opportunistic celebrities, politicians and foundation funded activists, Jon Stewart did the easy thing – to automatically cast his lot in with street mobs in order to curry favor with the average American audience. As it turns out, Stewart’s audience is slight shallower than most, as they chose to get their daily news and analysis from a comedian rather than an actual news outlet.

Ramos said, “There is a social issue about racism that should be discussed, about equal rights, opportunities,” Ramos said. “But that shouldn’t be crossed over into law and justice, where people don’t know the facts, what occurred, but they use that as a platform to talk about the racial issues that they are very passionate about. I think the platform they use — on the backs of our peace officers — is wrong.”

Ramos is right, and Stewart and his Comedy Central crew – are wrong.

The Daily Show is no comedy show, nor is it a news show – it’s a political program, which uses its platform to further certain sociopolitical agendas and talking points. By pandering to the mob and attempting to make light of police officers in the US, and not look at the reality of Ferguson and NYC incidents, Stewart is also acting as an official apologist for the looters and arsonists who destroyed their own communities.

They may ‘get it’ later on, but so far the lesson of Ferguson and Staten Island seems to be lost on most young social media users and Democrat Party oriented politicians and media workers. That point is: narratives are not truths.

More than anything though, this incident should be a warning to anyone who goes to the Daily Show to get their news now. They will lie to you.